Adam Blythe, an EBCI tribal member and a 1998 graduate of Swain County High School, completed his Doctoral degree in Criminal Justice from Northcentral University this past summer. He is also finishing his next two novels which will be released within the next year. 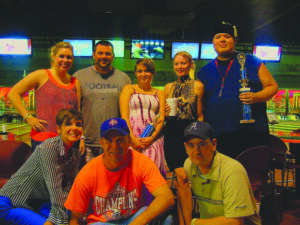 Adam Blythe (standing far right) celebrates his doctoral achievement with just a few of his friends in Montgomery, Ala. (Photo courtesy of Adam Blythe)

The capstone project of his doctoral studies was the topic of stronger penalties for animal abuse in North Carolina and the ramifications of continued negligence towards the issue. He spent over two years writing and rewriting the paper, consulted lawmakers, animal advocates, law enforcement officials, journals, and even a reformed animal abuser who is now an advocate for animal welfare. Blythe says the most painful aspect of the topic was being exposed to graphic details and pictures of animal torture, methods of abuse, and researching studies where animals began to shed tears in the midst of the torture. The most chilling element of the project was interacting with an individual who is a current animal abuser and shared with Blythe why he does it, when it started, and even what would stop him. Blythe presented his paper in May and completed over five years of doctoral study and research.

The doctorate degree is the end of Blythe’s long academic career. He earned two bachelor’s degrees: Journalism in 2003, Criminal Justice in 2004; a master’s degree in Criminal Justice in 2007, all from Faulkner University in Montgomery, Ala. Although his degree is complete, he has to wait until June 2014 to participate in the Commencement ceremonies at Northcentral University in Arizona. He says until then it is just a year-long celebration with his friends and family and extends his appreciation to the EBCI Department of Education and Training in Cherokee for their assistance and support. The degree has already placed him at the forefront for a position with the city of Montgomery.

He is also completing his next two novels. The first one tells the story of a soldier who returns home from Afghanistan only to become homeless and unwanted by family and friends. Losing everything he has except a dim faith in God, he is taken in by a sympathetic but foul-mouthed gas station attendant whose own life appears to be aimless. A freak accident changes everything in their lives, answers childhood prayers for both, but also puts them in danger if the soldier’s newfound superpowers resulting from the accident are exposed. The novel is Blythe’s second venture into the superhero genre.

The second novel is based on Blythe’s experiences working as a campus security officer with a friend who was tragically killed by a drunk driver earlier this year. The novel recounts their time on the midnight shift, how the campus took on a sinister nightmare quality, and how he and his friend faced and wielded off nameless and sometimes faceless terrors which threatened students and residential staff on campus throughout the night. The novel will also show how Blythe’s friend changed and affected his life before he passed away, including how his friend behaved, looked like, and even tried to sing like Justin Timberlake while on duty.

Dr. Adam Blythe is the son of Cathy Blythe and the grandson of Margaret Owl and the late Raymond Owl Sr. of Cherokee.  He is the nephew of Raymond Owl Jr., Nancy Owl, Barbara Owl, and Betty Owl, all of Cherokee. A member of the Church of Christ, he divides his time between family in North Carolina and friends in Alabama. In addition to being an author, an officer, and an animal lover, he is also an Alabama fan, rooting for the Crimson Tide every year.

You can find Adam on Facebook. His books, under the pen name ‘Big Adam’, are available on Amazon and other bookseller outlets.