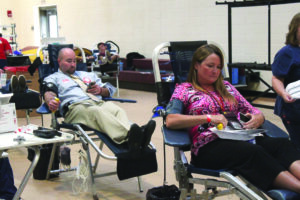 CHS was one unit shy of breaking the school’s collection record of 72 units, which was set at a blood drive in honor of Hess in 2007.  This was the 57th blood drive organized by Hess in 28 years.  She has dedicated her life to serving others and continues to set an example for her students.

This is first of three blood drives to be held this year.  Following in Hess’ footsteps, Joi Owle is set to host her first CHS blood drive on Nov. 26 as part of her senior project.  She hopes to set a record-breaking collection of units.  The last blood drive occurs in March.

Seventy-seven people presented to donate with twenty-seven being first-time donors.  CHS has the most double cell donors of any school in the area.

According to the American Red Cross, “Double red cell donation allows you to safely donate two units of red blood cells during one appointment as an automated donation process.”

In 2001, former Principal Ball and Hess moved the annual blood drive into the school and opened it up to student participation.  This is the high school’s 23rd blood drive and continues to draw more and more participation from students, faculty, staff and community members. 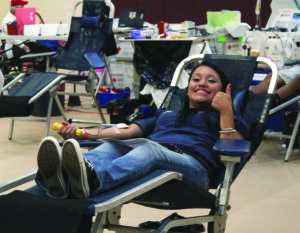 CHS senior Emre Johnson gives a big thumbs up as she donates blood.

It serves as a vehicle to teach the meaning and components of Sacred Path to our students and community members:  leadership, generosity, caring, sharing, and so many more.  The teaching does not stop with our community, but it extends outward to the surrounding counties.

Hess said, “Every time we do our blood drive, the Red Cross workers request to come her.  They are so impressed with the generosity and behavior of our students.  We have never received a negative comment in all the years we have been holding the blood drives.”

The representative from the American Red Cross said, “Thank you for a very successful blood drive today!  You all are very awesome! See you in the spring.”

The American Red Cross uses a variety of programs to reward students for their selfless generosity and service.  The Red Cord Program enables graduating students to earn a red honor cord from the American Red Cross.  It recognizes seniors who have participated in at least three activities, which include lifesaving blood donations and volunteering, during the school year.

The Blood Stock Scholarship Challenge awards a $1,000 scholarship to students who collect a minimum of 25 pints of blood and a $2,000 scholarship for 50 pints.  They can also receive a $50 gift card and a letter of recommendation from the American Red Cross if their drive makes goal.

The Making a Difference Educational Scholarship Program awards scholarship funds at four different levels ranging from $250 to $1,000.  In order for students to qualify for the scholarship, they must complete the following tasks:

Brianna Smith earned the 2013 CHS Making a Difference Educational Scholarship from the American Red Cross.  As a former student of Mrs. Hess, Brianna successfully hosted a blood drive last year and met the criteria for the scholarship.  She was awarded a $250 scholarship towards higher education.  Smith is an example to future students what can be accomplished with commitment, service, and hard work.

Contact Joi Owle or Frances Hess at Cherokee High School to participate in the next blood drive.  Help the school exceed its goals.  CHS relies on the support of the community.  Together we can make Joi’s blood drive a record-breaking success.  See you in November Brave Supporters!