Great Smoky Mountains National Park Superintendent, Dale Ditmanson, announced plans to retire on Jan. 3, 2014 after 36 years with the National Park Service (NPS). He has served in the Smokies as Superintendent since May of 2004 and has been recognized for his exceptional leadership as the 2009 Southeast Region’s Superintendent of the Year and the 2013 Association of Public Lands’ Agency Partner of the Year which he shared with recently retired Deputy Superintendent Kevin FitzGerald. Ditmanson is also a recipient of the Department of Interior’s Honor Award for Meritorious Service. 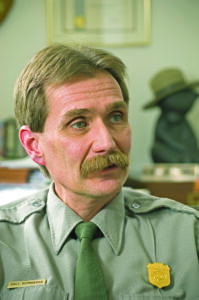 “Dale Ditmanson exemplifies the best of the National Park Service career employees: dedicated to the mission, driven to excellence and willing to fight to protect our National Parks. I appreciate all he has done for the American people throughout his NPS career and wish him well in retirement,” said NPS director Jon Jarvis.

Ditmanson chose to conclude his NPS career at the Smokies after nearly ten years where he had the opportunity to develop significant relationships with park gateway communities and partner organizations along with implementing a number of highly successful programs and collaborations including numerous events in honor of the Park’s 75th Anniversary in 2009. Among his many accomplishments, Ditmanson provided the vision and leadership, working closely with a tremendous management team and park partners, leading to the construction of facilities that will serve the public well into the future. These include the Twin Creeks Science and Education Center and the Oconaluftee Visitor Center. In addition, much needed renovations were made to Sugarlands Visitor Center, Appalachian Highlands Science Learning Center, Park Headquarters, Clingmans Dome Contact Station, as well as preservation of the Appalachian Clubhouse and Spence Cabin at Elkmont.

On top of  these facility improvements, Ditmanson guided one the largest infrastructure rehabilitation efforts in Park history after receiving over $80 million provided by the American Recovery and Reinvestment Act and a combination of additional revenue sources. The Park was able to restore over 32 miles of trails, 61 historic cemeteries, reroof and repaint 34 buildings, make ADA accessibility-related improvements to campground and picnic area restrooms, repave Cosby Campground, reconfigure and repave the Sinks Parking Area, repave the Clingmans Dome Road, repave the Roaring Fork/Cherokee Orchard Roads, and repave the Cades Cove Loop Road. Most recently, the Park celebrated the completion of Bridge 2 along the uncompleted section of the Foothills Parkway between Wears Valley and Walland leading the Park a step closer to completing the entire 16 mile section in time for the Centennial of the National Park Service in 2016.

Ditmanson worked tirelessly with gateway communities, partner groups, congressional staff, NPS staff, and Park neighbors to secure approval of a Memorandum of Agreement for the future of the Elkmont Historic District, accomplished a resolution leading to the North Shore Road settlement decision with Swain County, and developed the Trails Forever partnership between Friends of the Smokies and the Park. Through the Trails Forever program, dedicated crews have been able to complete significant trail rehabilitation projects incorporating volunteers in the process.

Ditmanson has also championed the protection of natural and cultural resources while serving in the Smokies working closely with Resource Management and Science Staff to support the reintroduction of Elk, pushing for improved air and water quality standards, and helping to secure needed funds for the Hemlock Woolly Adelgid suppression efforts. In the protection of cultural resources, he has developed a partnership dedicated to the completion of a future Collections Preservation Center which will house over 144,000 artifacts, 220,000 archival records and about 275 lineal feet of library materials. His commitment to stewardship has guided park staff in continued development of education programs reaching out to thousands of local school children as well as providing support for our 3,000 Volunteers in Park who partner with staff to help accomplish much needed work.

“Dale has been such an integral part of the National Park Service for so many years that it is difficult to see him go.  His impact is profound and positive across the NPS, from his seasonal ranger beginnings through his tenure as an instructor at Mather Training Center where he coached hundreds of NPS staff in visitor service skills and now as superintendent of Great Smoky Mountains National Park for the past 9 years.  We wish him well in his retirement and congratulate him on a career well done,” said Southeast Regional Director Stan Austin.

Ditmanson’s wife, Suzanne, a 1979 graduate from the University of Tennessee, teaches third grade at Pi Beta Phi Elementary School in Gatlinburg. They are the parents of two sons. Andrew, a program analyst with the U.S. Agency for International Development, lives in Washington, DC with his wife Jennifer, a marketing manager. Alex, a 2013 graduate of the University of Tennessee, is a nurse at East Tennessee Children’s Hospital in Knoxville. Dale and Suzanne plan to continue living in the region while exploring and discovering more NPS treasures.

More information will follow regarding a farewell celebration for Ditmanson in early January.