CULLOWHEE – Juanita Wilson, an alumna of Western Carolina University and EBCI tribal member, has joined the staff of WCU’s Division of Educational Outreach as director of the Western North Carolina Leadership Initiative. 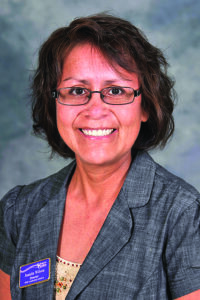 The WNC Leadership Initiative includes two programs funded through the Cherokee Preservation Foundation that are now being administered through WCU – the Cherokee Right Path Program and the new Coulter Regional Leadership Program. Both programs are focused on helping area residents develop leadership skills.

Begun in 2010, the 12-month Cherokee Right Path Program is designed to immerse adult members of the Eastern Band in tribal history and culture while developing leadership competencies. The third class from the program is scheduled to graduate Thursday, Sept. 12.

The Coulter Regional Leadership Program is open to all adults from the counties of Cherokee, Clay, Graham, Haywood, Jackson, Macon and Swain, and from the Qualla Boundary. The program is named in honor of the late Myron Coulter, a founding member of the Cherokee Preservation Foundation and chancellor at WCU from 1984 to 1994. Its first class will gather for an opening retreat in late October.

“Healthy communities need citizens with strong leadership skills,” Wilson said. “We are all familiar with skills centered on IQ, or intelligence quotient; however, emotional quotient plays an equally important role in leading people while honoring the cultures of the trainees.”

Wilson earned a master’s degree in management and leadership at Montreat College and a bachelor’s degree in sociology at WCU.