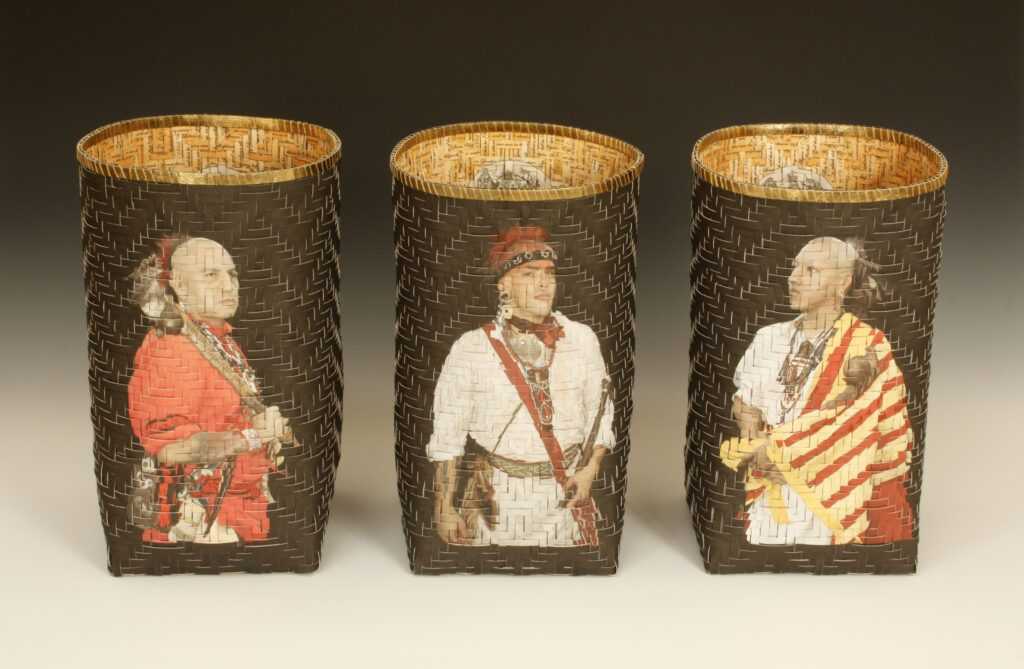 EBCI tribal member Shan Goshorn was the recipient of three major awards at the SWAIA Santa Fe Indian Market held Aug. 16-18 with a set of three baskets, entitled “They Were Called Kings”. This event boasts 1,200 juried artists and 150,000 attendees and is considered the most prestigious Indian art market in the world, drawing collectors and curators from around the world. 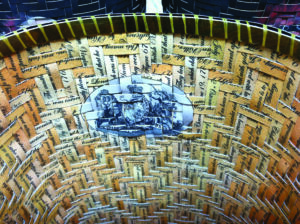 This photo shows the detail of on the inside of one of the award-winning baskets.

Winning First Place in her Division, Best of Category and Best of Classification placed Goshorn’s entry above all other baskets entered into competition and qualified her among the eleven finalists for Best of Show.

‘My work has always been about educating audiences regarding issues unique to Indian People,” said Goshorn. “Even though many of the treaties, maps, letters, legislation, etc is 200+ years old, they all still huge influences on Indian people today. I am especially excited about the basket medium I am currently using to address such issues because it highlights the Eastern Band specifically and our rich culture, our resilience and our presence in a modern world. We are a contemporary, progressive people who are reclaiming our traditions.”

“Winning at Indian Market feels like a validation of my 30 years of work. Literally hundreds of people came through my booth to see this work so I am especially proud that the winning baskets showcase members of our tribe today, whom we all know. These men are working daily to bring awareness to our people in a good way.”

Goshorn uniquely interprets traditional Cherokee basketry techniques in both single and double-weave styles. But, instead of using river cane or white oak, she fashions splints cut from archival paper that is first printed with reproductions of treaties, speeches, maps, photographs and other documents. When woven in combination, these baskets create powerful statements.

She was inspired to create this set by the Emissaries of Peace exhibition (Museum of the Cherokee Indian).  Her work pays homage to the three Cherokee warriors who traveled to England in 1762 to meet King George III. Featured on the front of the baskets are photographs she took three members of the Warriors of Anikituwah including Sonny Ledford, Mike Crowe and Kody Grant.

Goshorn works in a variety of media, but does not see herself as a basket maker, painter, photographer, jeweler or glass worker. Rather, she considers herself an artist who chooses the best medium to expresses a statement. She has been a human rights activist for over 20 years, with much of her work addressing issues that affect Indian people today.

Goshorn is the daughter of John and Edna Saunooke Goshorn and the granddaughter of Anderson and Stacy Powell Saunooke.