Goins, associate director of the Center for Healthy Aging Research and associate professor in the College of Public Health and Human Sciences at Oregon State University, will join the Western Carolina faculty effective Aug. 1. 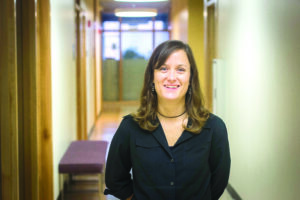 She will have an immediate impact on work under way at WCU to equip students with the skills needed to become effective health care professionals serving the needs of Western North Carolina’s growing number of retired baby boomers, and she will work closely with the Eastern Band of Cherokee Indians on Native American health care initiatives, said Marie Huff, interim dean of the College of Health and Human Sciences.

“Dr. Goins brings a great deal of knowledge and expertise related to issues affecting older adults in rural areas, with a specialized focus on aging among American Indian populations,” Huff said. “She also has a successful track record of grant-writing and scholarship. We are pleased that she will provide mentorship to students and faculty within the Department of Social Work and the College of Health and Human Sciences.”

At Oregon State, in addition to her work with the Center for Healthy Aging Research, Goins directs the College of Public Health and Human Science’s gerontology program and teaches in the School of Social and Behavioral Sciences. She also serves as a faculty member in the Native Elder Research Center at the University of Colorado’s Health Sciences Center and as an adjunct faculty member in the Department of Occupational Therapy at the University of Pittsburgh.

Goins grew up in Raleigh, went to college at East Carolina University and attended graduate school at the University of Massachusetts-Boston. She also studied at the Center for the Study of Aging and Human Development in Duke University’s Medical Center in 1997-98 through a National Institute on Aging Postdoctoral Research Fellowship in epidemiology.

The $500,000 Hyde professorship was made possible through a gift in 2005 from the late Wallace Hyde, a WCU alumnus and Raleigh businessman, in honor of his wife, Jeanette, a former vice chair of the WCU Board of Trustees. The gift was matched by state funds through a program initiated by the General Assembly to encourage private support of public institutions of higher education.

A successful businesswoman and banking executive who later was appointed by President Bill Clinton to serve as U.S. ambassador to seven Eastern Caribbean nations, Jeannette Hyde formerly was a member of the social work profession.

“As a former social worker, I have seen first-hand the contributions social work professionals are making to our society each and every day,” she said when the professorship was announced. “The increasing number of senior citizens in our nation’s population will require social workers with enhanced levels of education and training, and I hope this endowed professorship can enable Western to bring in a nationally recognized expert in gerontology who can help address those needs.”

Her husband, a former member of WCU’s Board of Trustees and its chairman for 11 years, led Gov. Bob Scott’s statewide committee to restructure the N.C. higher education system, from which the current University of North Carolina system evolved in 1971.

“In making this gift, I wanted to help the university I love the most in its efforts to achieve excellence, and I wanted to honor the woman I love the most,” he said in announcing the professorship at a WCU Board of Trustees meeting in 2005. He died Jan. 14 at the age of 89.