WCU presents ‘An Evening with Mark Twain’ on July 28 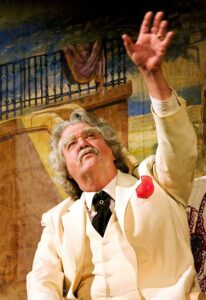 Sutton employs wit and satire in his performance as an elderly Samuel Clemens, the intellectual icon who created Mark Twain as a means of telling stories.

The performance is set in Clemens’ parlor and includes storytelling and music, as Clemens was a musician. Sutton will perform popular songs of the time on guitar, banjo and harmonica.

Born in Germany, Sutton immigrated to the United States in 1950. He studied history at the University of Georgia, where he developed an appreciation of Clemens. For the last seven years, Sutton has been touring across the United States with his two-act, interactive show.

The event is sponsored by the WCU Friends of the Arts organization and presented by the College of Fine and Performing Arts.

Tickets are $5 for all ages and will be available for purchase July 1 from the Bardo Arts Center box office, by calling 828-227-2479 or by going online to bardoartscenter.wcu.edu.