With violent crime rates on Indian reservations hovering at twice the national average, Charles Addington, a Cherokee Nation citizen employed by the Bureau of Indian Affairs (BIA), employed an innovative use of crime-statistical analysis, community-led policing, staffing realignments and other measures to tackle this disturbing problem.  For his efforts, he is a finalist for a Homeland Security & Law Enforcement Medal given by the Samuel J. Heyman Service to America Medals program. 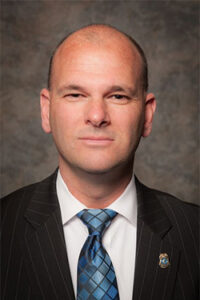 The goal of the comprehensive strategy, one of the Obama administration’s high priority initiatives, was to reduce the violent crime rates on four Indian reservations by 5 percent within two years as a pilot project that eventually could be replicated throughout Indian country. But Addington’s program far exceeded expectations by lowering the crime rate by 35 percent at the four participating Indian reservations.

“This has never been done in Indian country before,” said Darren Cruzan, director of BIA’s Office of Justice Services. “Lots of people were involved, but Charlie was the mastermind.”

The program focused on the Rocky Boy’s Reservation in Montana, the Mescalero Reservation in New Mexico, the Wind River Reservation in Wyoming, and the Standing Rock Reservation in North and South Dakota, and now has been extended to two other reservations. The agency is sharing this model among all other Native American communities.

“It was designed to make a difference in the lives of those on the reservations,” said Addington, a member of the Cherokee nation of Oklahoma and an associate director of the Office of Justice Services.

To ensure the program would have a large impact, Addington worked to get buy-in from tribal leadership.

“He really had to spend time to explain the program and the value of it,” Cruzan said. “Some tribes are distrusting of the federal government no matter what, and you are talking about four distinct communities.”

Since accurate crime statistics were not available, Addington led an effort to determine a crime-statistics baseline by coordinating specially trained law enforcement officers and program specialists to hand count three years of crime data. “We are very proud that we manually evaluated the past crime statistics so we could have a tool in the end that was valid and devoid of scrutiny,” Addington said.

He also utilized a community-wide assessment completed at each location to determine the law enforcement services available, resources needed to improve services, the current infrastructure of programs, residents’ quality of life and more.

“Charlie analyzed data to determine, based on time of day, location and other intelligence information, where the crime was going to be and how he could be on the preventive side, stopping it before it happened, rather than the reactive side where officers would be responding to calls,” said Jason Thompson, BIA’s assistant director.

Throughout the program’s execution, Addington made sure that stakeholders were engaged and had the opportunity to suggest possible improvements.

“He’s a leader,” Thompson said. “He understands what needs to be done, both the small steps and what the daily grind consists of to reach that goal, and he instills drive in the folks that work with him.”

After all the pieces of the multi-faceted approach were put in place and crime-reduction rates dropped seven times lower than the initial goal, tribal leaders heard from community members who said they felt safer and were more confident in local law enforcement.

“This probably couldn’t have happened if Charlie wasn’t leading the way,” said Mike Black, the director of the BIA. “If a problem arises, Charlie is the first to be on it and most of the time it’s solved before anyone else really knew it was a major problem.”

In 2012, the BIA’s Office of Justice Services published a handbook, available online, that contains best practices for reducing crime on Indian lands, and offers crime-fighting ideas and techniques to assist tribal leaders and their police departments and law enforcement partners.

“The success Charles demonstrated through this initiative shows just how much potential there is to make these best practices transferable to the hundreds of other communities suffering from high crime rates,” said Pam Haze, deputy assistant secretary of the Interior Department. “I’ve rarely been able to see someone overcome so many great challenges to build and create something that has been so successful and has so much potential.”