Paula Deen’s Kitchen at Harrah’s Cherokee Casino Resort opened its doors in 2010.  Now, less than three years later, it will be no more.  The restaurant itself will remain open, but will change names and its menu. 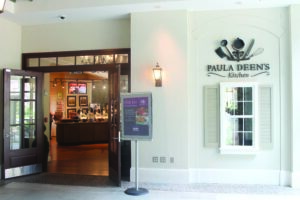 Paula Deen’s Kitchen at Harrah’s Cherokee Casino was open for business as usual on Wednesday, June 26, the same day that Caesars Entertainment officials announced that it was severing ties with the celebrity chef over controversial statements she made. The restaurant itself will remain open, but will be rebranded in the upcoming weeks with a different menu and name. (SCOTT MCKIE B.P./One Feather)

Following a firestorm surrounding Deen over revelations in a recent deposition of her use of the “n-word”, Caesars Entertainment announced on Wednesday, June 26 that it was not renewing the contract with Paula Deen Enterprises.  This means that, in addition to Paula Deen’s Kitchen at Harrah’s Cherokee, three other Paula Deen Restaurants will close including ones at Harrah’s Tunica, Harrah’s Joliet, and a buffet at Horseshoe Southern Indiana.

Jan Jones Blackhurst, executive vice president of communications and government affairs for Caesars Entertainment, said in a statement on June 26, “While we appreciate Paula’s sincere apologies for statements she made in her past that she recently disclosed during a deposition given in response to a lawsuit, after thoughtful consideration of their impact, we have mutually decided that it is in the best interests of both parties to part ways at this time.”

Gary Thompson, with Caesars Entertainment, assured, “We don’t plan to lay off any of the workers at this time.  We do plan to rebrand the restaurant at some point.”

Leeann Bridges, Harrah’s Cherokee vice president of marketing, related, “We will continue to operate the outlet with a new menu and eventual rebranding in the upcoming weeks.  We don’t anticipate changes that would affect our teams as we are motivated to make a transition seamless to our employees and guests alike.”

Caesars is not the only one that has severed ties with Deen following the controversy.  The Food Network dropped her on Friday, June 21 and Smithfield Foods, for which she served as a spokeswoman, dropped her on Monday, June 24.

The Food Network said in a statement, “Food Network will not renew Paula Deen’s contract when it expires at the end of this month.”

On the same day she was let go by the Food Network, Deen posted a video apology on YouTube in which she commented, “I want people to understand that my family and I are not the kind of people that the press is wanting to say we are.  I’ve spent the best of 24 years to help myself and others.  Your color of your skin, your religion, your sexual preference does not matter to me…but, it’s what in the heart.”

She went on to say, “And, I am here to say I am so sorry. I was wrong.  Yes, I’ve worked hard and I’ve made mistakes.  But, that is no excuse.  And, I offer my sincere apology to those that I have hurt.  And, I hope that you forgive me because this comes from the deepest part of my heart.”

Representatives for Deen did not return a request for comment by press time.