Cody Stubbs, an EBCI tribal member, is the newest member of the Idaho Falls Chukars – the Rookie Advanced farm team for the Kansas City Royals.  The UNC standout signed his contract with the Royals organization on Monday, June 24. 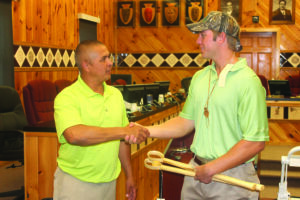 Cody Stubbs (right), an EBCI tribal member who has signed with the Kansas City Royals organization, is presented with a pair of Indian ball sticks from Principal Chief Michell Hicks. Stubbs held a meet-and-greet for tribal members in the Tribal Council House on Tuesday, June 25. (SCOTT MCKIE B.P./One Feather)

Prior to departing for Idaho, Stubbs took time out of his busy schedule to visit with fellow tribal members in Cherokee.  An informal meet-and-greet session was held at the Tribal Council House on Tuesday, June 25.

Principal Chief Michell Hicks presented Stubbs with a pair of Indian ball sticks, a warrior’s necklace and several other gifts.  “We just want to tell you how proud we are of you.  You represent our Tribe very well.”

Stubbs commented, “I certainly appreciate the support.  Playing ball is a lot of fun.  I certainly enjoy it.” 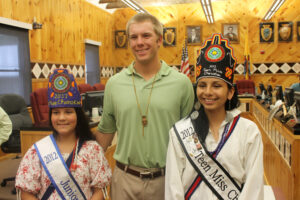 A 2009 graduate of Tuscola High School, Stubbs has played the past two years at first base for UNC.  This past season, he helped lead the Tarheels to an ACC Championship and a bid in the College World Series.

On the season, he ranked third in NCAA Division I with 76 RBIs and fifth with 101 hits.  He was named ACC Player of the Week twice (March 11 and April 8) and was named to the 2013 ACC All-Tournament team.

He was drafted by the Royals in the 8th round (234th pick) on Friday, June 7. Stubbs was drafted two other times in previous years (Boston Red Sox and Washington Nationals), but opted to stay in college both times.

Stubbs met with numerous people on Tuesday and signed autographs on items ranging from a UNC stuffed toy to a page from the Cherokee One Feather containing a story about him.

Cody Stubbs, an EBCI tribal member, has been drafted by the Kansas City Royals. He is shown in action as a member of the UNC baseball team. (Photo courtesy of UNC Athletic Dept.)

Chairman Jim Owle joked with Stubbs that a perfect situation would have had him signing to the Atlanta Braves.  “I’m just proud of you and wish you the best of luck.”

Birdtown Rep. Tunney Crowe echoed that sentiment, “We just appreciate what you’re doing, and you represent the Tribe very well.”

Stubbs is the great-grandson of Bertha and Chief Osley B. Saunooke.  He summed up his philosophy by telling the group, “I just go out and practice every day and do the best I can.”