NASHVILLE – United South and Eastern Tribes, Incorporated (USET) is setting goals and taking action to be a facilitator to national efforts to build capacity within Tribal nations to carry out the new Violence Against Women Act (VAWA) initiatives.  During its Semi-Annual Board of Directors meeting, USET adopted a resolution which creates a workgroup on violence against Native women to monitor policy, identify best practices, provide technical assistance, and provide public education and awareness to Indian Country. 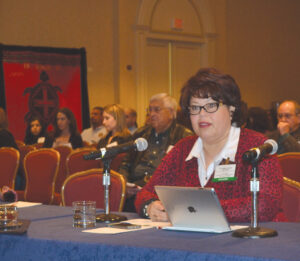 Painttown Rep. Terri Henry, a national advocate on Native women’s rights, speaks to the USET Board of Directors on VAWA issues during a meeting in May. (USET photo)

“This is an effort to preserve the legacy of our community,” said USET president Brian Patterson.  “The backbone of that legacy is held by our earth mothers to the mother earth.  USET wants to reinforce and build upon the work that is being done by so many to improve Tribal capacity to effectively enforce the new laws and initiatives that have been given to us through the VAWA reauthorization so that we are not just building safe neighborhoods, but healthy neighborhoods.  Once again we owe this work to our Native women, because they nurture our families and give us life in so many ways.  When our mothers and daughters live in fear, this creates an unstable community and destroys our community health.  That is why creating this workgroup is so important.”

Painttown Rep. Terri Henry, co-chair of the National Congress of American Indians (NCAI) Task Force on Violence Against Native Women, informed members of the USET Board of Directors in May that DOJ is going to offer assistance for Tribes in the form of grants.  Grants to Indian Tribal Government Programs could help Tribal government and courts build programs for code and legal policy development, prevention of sex trafficking and youth victimization.  Rep. Henry says this is one resource that will really help Indian Country build capacity to handle domestic violence and sexual assault with respect to law enforcement, Tribal courts and incarceration.

“We have to make sure our I’s are dotted and T’s are crossed,” she said.  “There is a lot at stake and we have to be better and exceed expectations.”

Advocates like Rep. Henry and NCAI Executive Director Jacqueline Johnson-Pata are urging Tribes to take advantage of resources and build their capacity to investigate, prosecute, and incarcerate non-Native’s accused of domestic violence and sexual assault, which is now permitted by VAWA.

Rep. Henry added, “We want all Tribes to be a part of the collective problem solving and solution finding that will create an effective system of justice to carry out this new law (VAWA).  Our ultimate goal is safety for our Native women, which is an important aspect of our Tribal sovereignty.  With USET’s effort to develop a workgroup, that’s ensuring we meet the unique needs of our Tribes which will make VAWA effective.”

According to Rep. Henry, advocates and Tribes are now awaiting Congressional appropriations to support Grants to Indian Tribal Government Programs.  She says the grants should be available to all Tribes who have basic justice systems in place like courts, prosecutors, public defenders, and law enforcement.