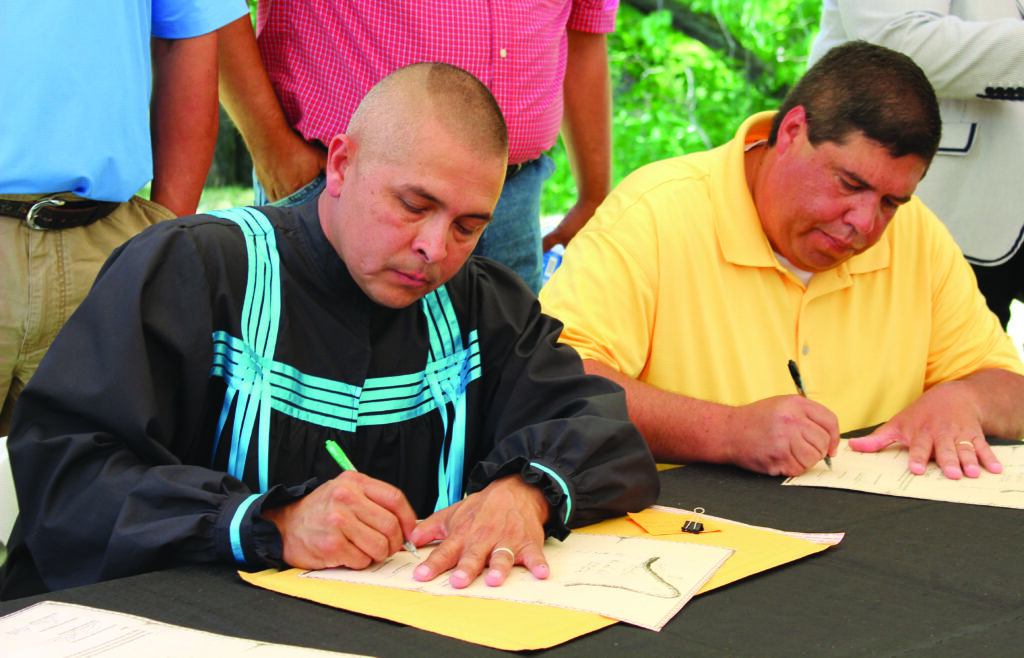 Principal Chief Michell Hicks and Vice Chairman Bill Taylor sign papers on Friday, May 31 that puts the Hall Mountain Tract into the hands of the Eastern Band of Cherokee Indians.

The Eastern Band of Cherokee Indians (EBCI) and the Land Trust for the Little Tennessee (LTLT) celebrated the deed signing of the Hall Mountain Tract in Macon County back to tribal ownership on May 31.

Hall Mountain, a 108 acre tract of land, is the viewshed of the historic Cowee Mound site which is located six miles south of Franklin.  The Mound, a site of great cultural significance to the Tribe, was the largest, busiest diplomatic and commercial center for the Cherokee people and all Native people on the East Coast until the late 1700s. Sharon Taylor, deputy director of the LTLT, worked with the Tribe in 2007 to return Cowee Mound to the EBCI.  LTLT is a Franklin-based land trust that works to protect the natural and cultural heritage of the Upper Little Tennessee and Hiwassee River Basins.

This project was a partnership between the LTLT, The Wilderness Society, and the EBCI and is among the first to receive a grant from the newly formed Community Forest and Open Space Conservation Program, one of just 10 recipients nationwide and one of only two in the Southeast to receive funding.

Big Cove Rep. Bo Taylor (foreground), a member of the Warriors of Anitiuwah, prepares to sing a traditional Cherokee song as fellow Warrior Daniel Tramper gets ready to dance.

Principal Chief Michell Hicks spoke of Hall Mountain during the Remember the Removal send-off event at Kituwah Mound on Saturday.  “Yesterday was a big day for us.  We repurchased the Hall Mountain Tract near the Cowee Mound.”

The Tribe now possesses Cowee Mound and the Hall Mountain Tract. Referring to another site in Franklin, he continued, “There’s a mound in Franklin named Nikwasi.  It needs to be back in the hands of the Cherokee.”

Along with the land transfer, the celebration featured several speeches by dignitaries and the dancing of the Warriors of Anikituhwah.