A ride to remember

EBCI Beloved Man Jerry Wolfe performs a traditional blessing and smudging for participants in the 2013 Remember the Removal Ride during a send-off event at the Kituwah Mound on Saturday, June 1. (SCOTT MCKIE B.P./One Feather photos)

Twenty-two Cherokee cyclists are embarking on a journey of a lifetime; a journey that will take them on a path their ancestors took 175 years ago.  Traveling over 900 miles by bicycle, the 2013 Remember the Removal Ride participants will retrace the Trail of Tears from New Echota, Ga. to Tahlequah, Okla.  during the month of June. 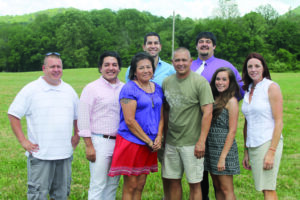 EBCI riders Elias Huskey and Kate Cooper participate in the blessing ceremony on top of the Kituwah Mound.

“I think it’s a fantastic opportunity,” said EBCI rider Yona Wade who works at the Cherokee Central Schools.  “I am very appreciative of being given the opportunity to go and represent the Eastern Band and better yet getting to go and remember those who went before us.  You can’t forget.  You can’t forget it.  I think it will be a life-changing opportunity for me and put a lot of things in perspective and give me more of an opportunity to come back and teach the history of the Cherokee to our people.”

Principal Chief Michell Hicks and former Principal Chief Joyce Dugan joined in the send-off event on Saturday.  “You have a very tough physical journey, but you also have a very tough emotional journey,” said Chief Hicks.  “We just want you to know that our prayers are with you.  When you get down or you get tired or feel homesick, just remember that there are a lot of prayers being lifted up for you.” 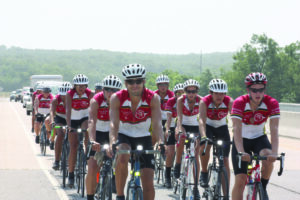 Chief Dugan said that the history of the Cherokee Trail of Tears as taught in most public schools is “sadly lacking.”  She related, “If you look at most textbooks, the Trail of Tears is mentioned in just a few sentences and that’s it.  I don’t think that most people in this country truly know of the impact.”

She also gave a brief history on how the Tribe came back into possession of the Kituwah Mound and property.

Judy Castorena, an EBCI tribal member who participated in the 2012 Remember the Removal Ride, told the crowd how the ride changed her life.  “It’s changed my heart.  It’s changed my perspective.  Now, after this bike ride, I know who I am.  I know what I fight for and what I believe in.”