By JEAN JONES
ONE FEATHER EDITOR

The Cherokee One Feather recognized Priscilla Squirrell and Elle Bradley of Cherokee High School at the CHS Academic Awards Program on Wednesday, May 22 for their entries in the One Feather’s Semi-Annual Creative Writing Contest. 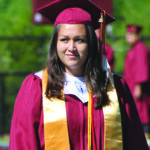 Elle Bradley, co-Valedictorian of the CHS Class of 2013 was one of the winners in the Cherokee One Feather Semi-Annual Creative Writing Contest. (SCOTT MCKIE B.P./One Feather)

In February, the Cherokee One Feather offered young writers the opportunity to showcase their creative talent by sponsoring a writing contest for high school students who are EBCI tribal members. The theme of the essay contest was “How do Cherokee youth relate/not relate to the suicide epidemic throughout Indian Country?”

Their essays were reviewed on the criteria of skillful writing, originality, authenticity, and an ability to capture a reader’s interest.

Squirrell is a junior and the daughter of Angela Squirrell of the Yellowhill Community.

Bradley is the co-valedictorian of the 2013 senior class and the daughter of Sharon Bradley of the Big Y Community.

Please see both essays below:

Being Native American, we are subject to many stereotypes. Some people come to Cherokee and ask where the teepees are. Typically when someone hears the word “Indian” they automatically think of a person wearing a headdress and possibly riding horses. As “real” Indians, we laugh when we hear these things. However, there are some stereotypes that we cannot laugh at because they hold some truth to them. Alcoholism is an example. Is has been a major problem in Indian Country for many years. Another major developing issue that relates to alcoholism is that of suicide among the Native youth. While suicide may be prevalent among many tribes and there are statistics proving it, it is fortunate to say that the youth of the EBCI are not majorly contributing to those statistics.
Suicide is a growing problem among the Native American youth. From ages 15-24, Native youth have the highest suicidal rate. According to an NBC news article, Native youth are 9 to 19 times more likely to commit suicide than other youth. Most suicide occurrences among the Native American youth are reported from tribes in the Southwest, the Northern plains, and Alaska. Efforts are being made to try and help this growing problem but it doesn’t seem to be enough. According to the same article, compared to other youth of the nation, Alaskan native males are nine times more likely to commit suicide and females are nineteen times more likely to commit suicide. The problem is that suicides are becoming so common among tribes and reservations that they are almost considered normal.
So why is all of this happening to native youth? There are many factors that go on behind the scenes that can contribute to a person’s suicide. However, there are also some common occurring factors too. From observation, the general reason anyone commits suicide is because they feel like they have nothing left to live for. For years, Native Americans have been looked down upon because we are a minority. Not a lot of people expect much from us because not all of us have a good track record. Some would say that the self-destruction is a result of years of trauma such as land loss and loss of culture. Many youth are victims of depression, domestic violence and other issues. As Cherokee, we have been blessed with a lot but there are some reservations that aren’t as well off. Native youth often believe that they don’t have as much potential as other youth because of where they come from. In addition, the youth are probably not getting they support they need, thus ultimately leading to suicide.
It is my belief that Cherokee youth are not related to the suicide epidemic occurring throughout Indian country. We are fortunate that we can say that there have been little to no suicides among the enrolled members of this tribe. As aforementioned, we have been very blessed. The youth of this tribe have been given many opportunities. We have the advantage of having our post-high school education paid for. We could go anywhere we want and be anything we wish. We also have a very supportive community filled with people that are more than willing to help us get where we need to be. It is because of this that the majority of our youth lead happy lives. Our tribe has given us plenty of opportunities to take advantage of and it give us something to look forward to.
While the majority of the youth of our tribe are not suicidal, it is imperative that we don’t overlook the minority that have been or thought of being suicidal. Just because many of our youth are content with their lives doesn’t mean that we should ignore the ones that are having problems. Being a teen and living on a reservation is not always easy. Establishing preventative and supportive programs is an important thing to accomplish. Not only that, but we as individuals need to establish our own morality and be more supportive to everyone. Everyone fights their own battles. WE never know what a person may be going through. Sometimes, it could be one small act of kindness that could give a person hope. As indigenous people, we should also look to our traditions to help. Most tribes value respect and family. This would offer support and encouragement to those that need it. Feeling a sense of value is what the native youth population need.

The Suicide rate among Native American youth is alarming. It’s 3.5 times the national average, which is extremely disturbing. Some Native communities even have the suicide rate 10 times higher than the national average. Fortunately, this doesn’t seem to be happening in Cherokee. A few things come into play as to why the suicide rate is low; we have the casino, a caring tribe, and educational opportunities that numerous amounts of tribes unfortunately do not have.
The casino is a huge factor in the Cherokee community. It employs many of our members and it’s a great entertainment source. Besides gaming it offers restaurants, concerts, shows and a spa; all of this brings tourism. Tourism brings in money, which gives us our per capita checks. Many tribes are dirt-poor and poverty may lead to suicide in their youth.
Our tribe is very well put together and they genuinely care about their youth. We have free health care, education, school lunch, and much more. Suicide can be caused by depression, which is a mental illness. With free health care, depression can be treated and can prevent possible suicides. There’s always someone to talk to as well, like school guidance counselors and teachers. You could basically talk to anyone because they honestly care.
The education opportunities give in Cherokee are phenomenal. There are many programs accessible to Cherokee youth. Many of the programs help out with college or after high school careers. Our tribe pays for college, which is a remarkable thing. They will also reward you with incentive checks for your grades are well. Other Native youth may not have the opportunity to finish high school, let alone go beyond it. The Cherokee youth has it well, almost too well; there should be no excuse for an uneducated adult in Cherokee.
All of these good things on the reservation lead to our low suicide rate. Cherokee isn’t a stereotypical Native American community, doused with alcoholism and poverty-stricken. Many other tribes just don’t have the access to resources to better their youth, which is why I believe their suicide rate is high. It’s not that the Cherokee community is boastful; it’s that we’re accomplished, and we should work on helping out less fortunate Native American tribes. It may just ride this suicide epidemic among Native American youth.