Our lives are before us…CHS Class of 2013 graduates

Justice Littlejohn is all smiles as he receives his diploma from Cherokee High School during commencement services held at Ray Kinsland Stadium on Saturday, May 25. (SCOTT MCKIE B.P./One Feather photos)

With the class motto of “Our lives are before us, our pasts are behind us, but our memories are forever with us,” the Cherokee High School Class of 2013 received their diplomas at commencement services held Saturday, May 25 at Ray Kinsland Stadium.

Edmond Hawk French (right) lets out a warrior’s yell after the Cherokee High School seniors move their tassels on their caps officially signifying them as high school graduates.

Co-Valedictorians Ashley Bottchenbaugh and Elle Bradley and Salutatorian Gabriella Thompson led the class which graduated with the highest grade point average in school history.  The CHS Class of 2013 is also the first one to attend all four years at the new school.

“These seniors are truly an amazing group, and I have been blessed to work with them for the past four years,” said CHS athletic director Craig Barker who served as the emcee for Saturday’s commencement. 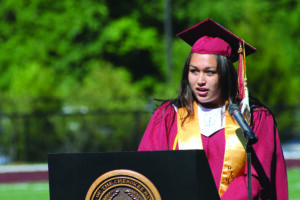 “I am so happy to have met you all,” Bottchenbaugh said during her Valedictory address.  “I am so proud of all of us and our accomplishments.  This is not the end, it is the beginning.”

She encouraged her classmates to never lose their standards.  “You are all beautiful people.  Never let anyone tell you that you can’t do it and if they do tell you that, prove them wrong.”

In her Valedictory address, Bradley said, “We carry the burden of responsibility.  We must take our traditions and let them live within us.”

“Sacrifice, determination and pride are the elements that have brought our community to where we are today.  We are the future of the Eastern Band of Cherokee Indians and the pride of a nation lies within us.” 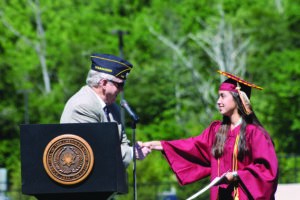 She left her classmates with, “Our culture and heritage make us who we are.”

Thompson commented during her Salutatory address, “I am both shocked and honored to be the Salutatorian for the Class of 2013.”

Laughingly, she said, “If I could describe our class in one word it would be lazy…we always seem to work our best with our backs against the wall, but we always got it done.”

She went on to say, “Start every day with a new hope.  Always put your faith in God.  Have faith in yourself and never give up on your dreams.”

Several awards were given during the event including:

Wilson Pipestem, an Otoe-Missouria/Osage who has worked with the EBCI on numerous legal and lobbying efforts in Washington including the Ravensford Land Exchange, gave the commencement address. 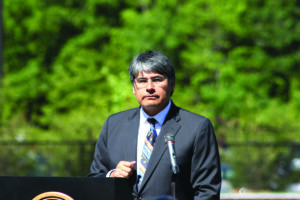 He told of his own high school and college days in Oklahoma where he was a stand-out runner garnering a cross country scholarship to Oklahoma State University.  But, an injury changed his path and dream of becoming an Olympic athlete.

“I  found out that God had a plan for me like he does for the graduates today.”

Pipestem challenged the graduates, “Who are going to be the innovators in the Class of 2013?”

“Unlike other communities, there is an obligation of these young people to their tribal nation as well…I am proud of every one of you.”

He ended by stating, “When you innovate and you rely on the grace and guidance of God, you can change the world.”

Ray Kinsland gave the invocation and benediction for the event and processional (“Pomp and Circumstance”) and recessional (“Rudimentary March”) marches were played by the Cherokee High School band.