A DAY TO REMEMBER

Fallen heroes of every branch of the United States Armed Forces were honored and remembered at a special Memorial Day Ceremony in Cherokee.  The Steve Youngdeer American Legion Post 143 held the ceremony on Monday, May 27 at the Yellowhill Veterans Cemetery. 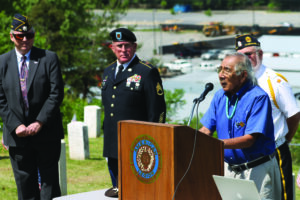 “Freedom reigns in America today because of common men and women of uncommon valor,” said Lew Harding, Post 143 Commander.  “This day is a day of pride and reflection.  This is a day to remember.”

He said the history of America is filled with the sacrifices of those who served.  “It is our responsibility to never forget and we are honor-bound to not let others forget.  It is hard to complain about the high cost of anything this weekend when we think of the high cost they paid for us all.”

Following the posting of the colors by the Post 143 Color Guard, Big Cove Rep. Perry Shell, a U.S. Army veteran, gave the opening prayer.  Harding’s opening remarks were followed by a musical presentation of “Sung in Honor of Those Who Served” by Legionnaire Phyllis Shell.

Legionnaire Jack Saunooke (right) reads the Roll of Honor honoring EBCI tribal members who died in service while fellow Legionnaire Sam Lambert performs the ringing of the bell ceremony in their honor.

Ray Kinsland, the keynote speaker, commented, “When I pray, whether publically or privately, I’m careful to thank God for our freedom and for the men and women who sacrificed to make that freedom possible.”

Kinsland said that over 1,200 EBCI tribal members have served in the Armed Forces since the Revolutionary War.  “Let us vow to never forget their dedication.  When they were needed, they answered the call.  The Cherokee example is one of selfless service.”

EBCI Beloved Man Jerry Wolfe served as a Petty Officer – 2nd Class in the U.S. Navy during World War II and participated in the D-Day Invasion of Normandy.  “Today’s ceremony is dedicated to those Eastern Band of Cherokee men and women who answered the call and made the ultimate sacrifice.”

Of his service at D-Day, Wolfe noted, “It was a great experience.  It was a good thing to free the French people.  Had we not invaded, we probably would have been invaded by our enemy.”

In a special presentation at Monday’s event, a family from Niort, France recognized the valor of the three World War II veterans in attendance – Wolfe, Reuben Taylor and former Principal Chief Robert Youngdeer – and presented each with a carved angel.

“We just could not come here and not say thank you,” said Florence Paul, wife of EBCI tribal member Bill Paul.  “To us, they are our angels.”

Legionnaire Jack Saunooke then read the Roll of Honor honoring EBCI tribal members who died in service while fellow Legionnaire Sam Lambert performed the ringing of the bell ceremony in their honor.

Post 143 service officer Warren Dupree read the poem “In Flanders Field” which was followed by the placing of the memorial wreath by Maj. William Underwood and Wolfe.

The Post 143 Color Guard then fired a salute to the fallen which was followed by Taps and the benediction by Maj. Underwood.