Alan Sheppard has been in the pawn business for over 25 years, and he has brought that expertise to Cherokee.  Alan’s Jewelry & Pawn officially opened in the Painttown Community with a ribbon cutting ceremony on Friday, May 24.

“I would like to thank the Eastern Band of the Cherokee Nation for making this happen,” he said.  “It has been 25 years in the making for me in this business.  When I got into this business, it was to provide a service for those that needed it and provide it in a clean and friendly environment.”

He said the idea for the store in Cherokee, the sixth pawn store he owns, has been something he and his wife have been thinking about for several years.  “When this location became available, it was time.  And, it was fitting too as we’ve been expanding and opening a few new stores.  It’s just a great community.”

His other stores, located throughout western North Carolina, employ a total of 76 people and the store in Cherokee will employ 12 once fully staffed.

Alan’s wife, Tania Sheppard, commented, “It feels great.  We’re excited about being in Cherokee.  It’s something we’ve wanted to do for awhile and we finally found a location that suited us.” 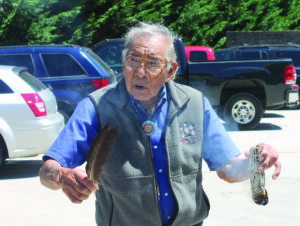 EBCI Beloved Man Jerry Wolfe speaks to the crowd as he provides a traditional smudging and blessing of the business and its employees.

“My family is from this area so we know the people here are wonderful so we’re anxious.  We feel it will be good.”

Alan added that his goal in the pawn business has always been to provide a needed service and treat people with respect.  “It’s been 25 years of trying to change the image of an industry.”

Prior to the ribbon cutting, EBCI Beloved Man Jerry Wolfe provided a traditional smudging and blessing of the business and its employees.

Alan’s Jewelry & Pawn will have a 24-hour drive-thru service with the store part being open daily 9am – 9pm except for Christmas Day.