At 11:10pm on Thursday, May 23, the Cherokee Indian Police Department responded to a report of a suspicious person at the Big Cove Recreation Center. Upon arrival, officers located the suspect, Chris Hill, of Cherokee. 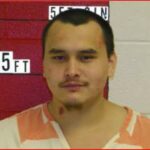 Chris Hill was taken into custody on Thursday night following a stand-off at the Big Cove Recreation Center. (CIPD photo)

As police officers arrived on scene, Hill barricaded himself inside of an office in the recreation center and claimed to be armed. The CIPD SWAT team and NRE were called to the scene. There was a “stand-off” which resulted in Hill being found in the ceiling area of the Recreation Center and taken into custody. There were a few minor injuries to officers and damage to the Recreation Center due to Hill being extracted from the ceiling area.

Hill is charged with Criminal Damage to Property (Vandalism), Trespassing -1st degree and Burglary- Forcible entry. He is also suspected of several burglary / larceny crimes that happened early on the same day in the Big Cove Community.  Hill is facing many other charges pending investigation.

“Hill was at the wrong end of a community and law enforcement effort that is tired of thefts, drugs, and abuse,” said Cherokee Chief of Police Ben Reed.  “After all these years, I am still amazed at the willingness and dedication of our officers and emergency services, to protect our community. It’s an awesome thing to be a part of.  I thank the Lord for the ability and strength to do so. I thank the Lord no one was seriously hurt. Pray for Chris Hill and all involved. Pray for those on drugs. Pray for God’s mercy on our community. Thank you all.”