As a collaborative project between the Eastern Band of Cherokees and several other agencies, Northern Red Oak trees have been manually planted on the Tribal Reserve at the head of Jenkins Creek.  The tree planting is a promotion of forest and wildlife management here on the Qualla Boundary. 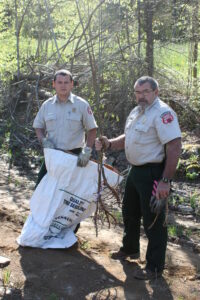 Dwayne Vigil, Haywood County Ranger for the NC Forest Service, commented, “It’s always exciting to see that our cooperators are actively engaged with sound forest management in trying to grow a better specie of tree that eventually might be a good commercial specie for NC, for its citizens, and for the public to be able to plant and in the future to harvest.”

Tommy Cabe, EBCI forest resource specialist, stated, “We know that all the trees will not make it due to a variety of reasons. However, those that do hopefully will grow to their full potential.  From a forester’s perspective this is a way we can predict timber volume in the future. The extra bonus is the mass of acorns for wildlife.  It is always exciting to see how projects like this will turn out.“

“It’s a renewal natural resource that can be used and harvested as long as we ensure we’re replanting like we’re doing today,” Vigil said.  He explained that they will be genetically looking at these mass producing trees to determine if the red oak is a specie that is going to grow well here within western North Carolina.

In a final statement Cabe said, “In the future we look forward to strengthening these relationships for future projects. In closing, I would like to say thank you to all of those who assisted in this project and an extended thank you to the executive office for lunch during the two days we planted the trees.  Sgi!”