Cherokee standout Tavi Rivera will continue his wrestling career at Belmont Abbey College this fall.  He signed a letter of intent on Thursday, May 16 to wrestle for the Division II school located in Belmont.

Tavi Rivera (seated center) signs a letter of intent on Thursday, May 16 to wrestle for Belmont Abbey College this fall. He is shown with his parents Domingo Rivera (seated left) and Teresa Walkingstick Rivera (seated right) and the members of Cherokee’s wrestling team. (SCOTT MCKIE B.P./One Feather)

“I’m pretty excited about it,” said Rivera.  “I am glad I got an honor like this.  I just really want to go and get an education to better myself.  I appreciate everyone that has helped me; from all of my coaches and my wrestling team, I couldn’t have done this without them.  I am just really excited to further my career and see what else I can do.”

Rivera was a fixture at the 1A state wrestling finals at the 160lb. weight class.  He was state runner-up his junior and senior years, took third place in his sophomore year and fourth place in his freshman year.  He won the 1A West Regional championship and the Smoky Mountain Conference championship his junior and senior years and took third place in both his sophomore year. 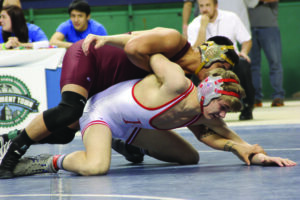 Cherokee’s Tavi Rivera took second place in the 160lb. division at the 2013 1A state wrestling championship. Here, he wrestles Bryan Wallace, Hendersonville, in the state final. (Photo by Anthony Swearengin)

Rivera’s mother, Teresa Walkingstick Rivera, commented, “It will be a great experience and a great privilege.  There are so many people my age that didn’t get to go to college due to lack of funding, and so, nowadays, knowing that the Tribe can send our kids to school is a great opportunity and a great privilege and we thank you so much.”

She added, “But, with anything that is given, I raised my son to know that he has to work for it and he has to work hard…Tavi has really proven that he is a good son and a good person.”

CHS athletic director Craig Barker said, “It’s just great anytime we get someone going to the next level.  Education is the key to life.  Tavi is a great wrestler.  He’s a great young man who represents our Tribe to the fullest extent, and he is going to be a success.  We are just as excited as we can be to have him go on to college at the next level representing our school and our Tribe.”

CHS head wrestling coach Will Lambert noted, “It’s feel really good.  He is a bright, young guy.  We look for him to do really well in college, both as a wrestler and academics too.”

Rivera was named 2013 Smoky Mountain Conference co-wrestler of the year along with Swain’s Sean Webb.