Until this past January, American Indian and Alaska Native communities did not have the ability to seek a Presidential disaster declaration from the U.S. Federal Emergency Management Agency (FEMA) without gaining state approval. Sometimes Tribal disasters were ignored by states or the Tribal-state relationships were poor and Indian nations would suffer natural disasters without federal assistance.

FEMA Administrator Craig Fugate has taken the approach to learn by doing. The first Presidential Disaster Declaration was given to the Eastern Band of Cherokee Indians.  The second was issued to the Navajo.  FEMA is on site at both locations concluding assessments and assisting with rebuilding efforts. Administrator Fugate has said policy and procedure for managing disaster declarations, which did not exist at the time the Stafford Act was amended, will be developed over time because Indian Country could not wait for more devastation to occur.

FEMA Special Advisor for National Tribal Affairs Richard Flores described the action plan to USET on Tuesday, May 14, “Basically, we had a policy and procedures for how we deal with states when a Presidential Disaster Declaration is granted. It’s a one size fits all approach to the states. But, FEMA knew that most of the Tribes have unique circumstances and that approach would not work.” 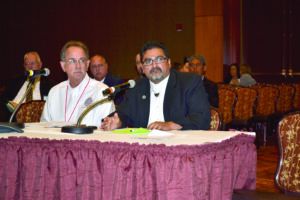 Flores says it was wise for FEMA and Tribes to begin with the state policies and procedures and develop a Tribal model, “We have and continue to have consultation conference calls to mold the policy and it appears to be working well.”

USET Senior Project Coordinator Harrell French says all Tribes need to take advantage of training and program development resources. “Most people will consider the Eastern Band of Cherokee Indians to have a well-developed and advanced emergency management program. According to Mollie Grant, the EM manager, there are areas where they need to build up their program so they can meet the demands of a disaster declaration. So we have all pitched in to helping the Cherokee. I would strongly advise every Tribe to seek planning and training assistance if they intend to administer a Presidential Disaster Declaration.”

The approach FEMA is taking with implementation to Stafford is not the same for the U.S. Department of Justice (DOJ) for VAWA. While VAWA is truly in effect, DOJ is working to build capacity with Tribal law enforcement, corrections, and courts first before exercising the law. Its justification is to consider all policies, procedures, laws, and infrastructure are in place in order to make enforce the law and protect individual rights.

Painttown Rep. Terri Henry, who is co-Chair of the National Congress of American Indians (NCAI) Task Force on Violence Against Native Women, informed USET this week that the DOJ is going to offer assistance for Tribes in the form of grants.

“We have to make sure our I’s are dotted and T’s are crossed,” she said.  “There is a lot at stake and we have to be better and exceed expectations.,”

She added, “We want all Tribes to be a part of the collective problem solving and solution finding that will create an effective system of justice to carry out this new law (VAWA). Our ultimate goal is to protect our community and keep everyone safe.”

According to Rep. Henry, advocates and Tribes are now awaiting for Congressional appropriations to support Grants to Indian Tribal Government Programs. She says they should be available to all Tribes who have basic justice systems in place like courts, prosecutors, public defenders, and law enforcement.