NIAGARA FALLS, NY – United South and Eastern Tribes, Incorporated’s (USET) 2013 Semi-Annual Meeting is underway.  Four days of meetings and activities are taking place at the Seneca Niagara Casino & Hotel from May 14-17. Leaders from USET’s 26 member Tribal Nations that comprise the Board of Directors and committees will be receiving updates and taking action on legislative and policy issues that make an impact on Indian Country. The Semi-Annual meeting is hosted by the Seneca Nation of Indians. 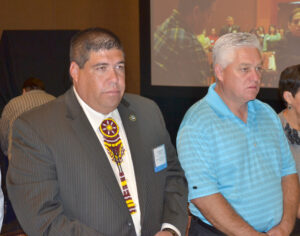 Vice Chairman Bill Taylor and Chairman Jim Owle are shown at the opening of USET’s Semi-Annual Meeting in Niagara Falls on Tuesday, May 14. (USET photos)

“We’ve been working long and hard. USET was a conception many many years and it grew,” said Snyder.  “It became something to deal with on the state and federal levels. It is important for us to recognize organizations like USET so it will grow. So we will not be left behind. It means a lot to all of us. As you know as leaders we are always thinking of our future seven generations. As long as we are together no one can divide us.”

During this week, USET Board of Directors will hear updates on the following:

Updates will be given from the following agencies: 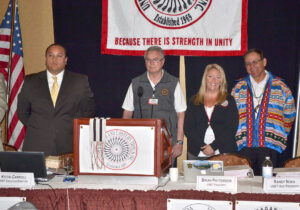 Early in its meeting, USET recognized two employees from the Nashville Office. Dr. Byron Jasper and Callie Leasure were honored. Dr. Jasper is retiring after more than 30 years of service as a commissioned officer with Indian Health Service and more than a decade of service to USET as deputy director of Tribal Health Program Support. Leasure is leaving USET to begin a business in the health and fitness field. Leasure has worked for USET for slightly more than four years as its executive assistant.

USET President Brian Patterson made opening remarks, “With so many opportunities and challenges presenting themselves to Indian Country and to our USET community, we hope you are ready to engage in meaningful discussions that will lead to decision making that will help create the greater opportunities to rebuild our nations. Among the topics of discussion, we must consider the resulting effects of the federal sequestration and how this will influence Indian County and how it should guide our planning for the future. I am encouraged that we will meet these challenges, create solutions, and continue to move forward with your engagement here at the Semi-Annual meeting.”