When Kevin Jackson received his Master’s Degree in Human Environmental Science from the University of Alabama a week ago, he capped off years of simultaneously being a student, a full-time employee in the EBCI Information Technology (IT) department, and mentor and coach to young people who want to learn more about their Cherokee cultural heritage and build on their leadership capabilities.

The Wolfetown resident, 32, is an Army veteran who began acquiring his leadership skills during two years of service in Afghanistan.  After his discharge, he started working for the IT department in 2008, and a year later, he began working on his B.S. degree in business management at Montreat College during his off hours. 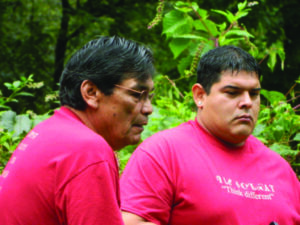 Kevin Jackson (right) listens to Tom Belt describe the significance of Judaculla Rock during a Jones-Bowman retreat. Both are mentors in the leadership development program for college undergraduates.(CPF photo)

As an undergraduate student, he began participating in the Jones-Bowman Leadership Award Program.  Jones-Bowman Fellows receive funding of approximately $4,000 for individual leadership learning plans they develop with their mentor.  Jackson’s Jones-Bowman experience included visiting the Lummi Nation on Washington’s northern coast to learn about their Veteran Assistance Program and bring ideas back to Cherokee.  He also visited Microsoft’s campus in Redmond, Washington, and learned about opportunities for Native American tribes.

Then other leadership programs developed by Cherokee Preservation Program and members of the community caught his attention.  These include the Cherokee Youth Council and the annual Costa Rica Eco-Study Tour, for which the EBCI Cooperative Extension Program provides leadership, and The Right Path, a program for adult members of the EBCI.

“I strongly believe in the traditional philosophy and cultural practices of the Cherokee people,” Jackson said.  “I’m committed to teaching and mentoring members of my community and will always encourage our people to further their education and learn about our rich culture.”

As a result of this commitment, Jackson has served as a chaperone on four trips to Costa Rica and serves on the board of the Cherokee Youth Council. In July, he will accompany Youth Council members attending the United National Indian Tribal Youth (UNITY) conference, which this year will be in Los Angeles.

He is a member of the Advisory Council for The Right Path and has helped teach emerging leaders in The Right Path about leadership roles and responsibilities.  And after he completed his Fellowship in the Jones-Bowman Program, he became a mentor to younger tribal members who are Jones-Bowman Fellows today.   This year he is mentoring Jerae Jackson and Dakota Brown.

“My passion for cultural preservation and language revitalization is a driving force in my life,” said Jackson.  “All of the leadership programs are wonderful opportunities to learn more about Cherokee leadership, traditions and all aspects of our culture and they are made available to members of the eastern band.   I chose to take advantage of my opportunities to learn how to lead instead of taking a back seat, and I hope others will, too.”

Even with all of his activities in the community, Jackson was able to take advantage of the University of Alabama’s Distance Learning Program and earn his Master’s degree in Human Environmental Science, with a concentration in Interactive Technology.  He went to Tuscaloosa, AL, on May 4 to accept his diploma in person.

“Cherokee Preservation Foundation’s staff and all the people involved in the Jones-Bowman, Costa Rica Eco-Study Tour, Cherokee Youth Council and The Right Path programs appreciate Kevin Jackson’s commitment to our community,” said Alicia Jacobs, Jones-Bowman Leadership Award Program Coordinator.  “We congratulate him on earning his Master’s degree and thank him for all he does.”