April was a busy month for Hunter Thomas and Dakota Brown as both college students hit the road to launch an exciting initiative titled My Green; a social media campaign targeted to Native youth and finance.  The program was created by First Nations Development Institute with funding from the Financial Industry Regulatory Authority to assist young people, who are members of tribes that provide minor’s trusts, with challenges they might encounter when receiving a sizeable payment. 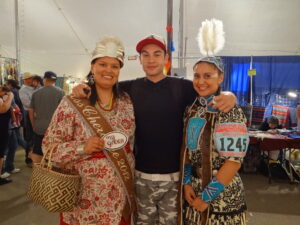 EBCI tribal members Thomas and Brown were selected along with two other young people from the Ho-Chunk Nation in Wisconsin to serve as spokespersons for the national campaign based on their experiences with having personally received a minor’s trust payment.

While My Green primarily uses social media channels such as Facebook, YouTube, and Twitter to connect with youth; the campaign organizers chose live venues to kick off the program, staffing outreach booths at the Native American Finance Officers Association Conference in Nashville, Tenn. and the Gathering of Nations pow wow in Albuquerque, NM.

Thomas traveled to both events, speaking with hundreds of people about the program.

“I’m really excited to be a part of the My Green team,” the 23-year-old Wolfetown resident commented.  “It’s a great opportunity for Native youth across the country to share experiences, learn valuable money skills, and discuss issues they might encounter when receiving a large amount of money.  I only wish there had been something like this when I got my big money.”

The My Green strategy consists of a Facebook page and YouTube channel designed to steer users to a website equipped with money tools, video interviews, a forum for youth to share meaningful dialogue, and even a video game simulation that allows players to try their hand at managing a “big money” payout.  First Nations created the program in response to the demand to provide financial education to a growing number of Native youth who receive large lump sums as part of a minor’s trust payout, many of whom might lack the skills to handle such a significant windfall.

First Nations Project Officer, Ruben Hernandez, helped develop the campaign and assisted the team in Nashville and Albuquerque, uploading minute by minute Facebook posts, photos, and videos for My Green’s growing number of social media followers.  Moreover, he firmly believes in the power of social media as a platform to reach Native youth.

“Take a look around and watch how kids communicate today,” stated Hernandez.  “They use phones and other mobile devices to text, facebook, stream high definition videos, and play games.  Our goal is to make financial information as easy as possible for young people to access, so naturally we’re using technology as our tool of choice.”

Brown, who along with her campaign peers, appears on life size My Green branded banners and posters as well as a video in which she tells the story of how, along with her mother, she created a detailed plan to accomplish goals such as going to school, attending cultural events, and purchasing a new vehicle before receiving her “big money”.  Moreover, the 24-year-old Snowbird community member not only worked the My Green booth alongside Thomas at the pow wow, but even found the energy to participate in the women’s jingle dress competition.

“I had an awesome time in Albuquerque,” she said.  “It was wonderful to meet young Natives who face similar issues with money, and be able to listen to some of their concerns.  I’ve always wanted to dance at Gathering too so that was a nice little added bonus.”

The My Green road tour will continue through the summer and fall with stops scheduled at the United National Indian Tribal Youth Conference in Los Angeles, CA on July 12-16 and the National Indian Education Association Annual Convention in Rapid City, SD on Oct. 30 – Nov. 2.

To pick up free My Green promotional items such as posters, sunglasses, water bottles, bumper stickers, and t-shirts stop by The Sequoyah Fund Office in the Ginger Lynn Welch Complex.

Shawn is a programs consultant with the Sequoyah Fund and First Nations Development Institute.  He can be contacted at sspruce@sequoyahfund.org or (828) 359-5004.