FRANKLIN – The Qualla Boundary Special Olympics team traveled to Macon Middle School on Friday, May 3 to participate in the annual Far West Special Olympics Spring Games.  The Qualla contingent consisted of 21 athletes and 25 volunteers as well as family, friends and supporters.

“The Qualla Boundary is excited to have so many athletes, volunteer and community supporters out today in Macon County,” said Lana Lambert, Qualla Boundary Special Olympics coordinator.  “We wish all of the athletes good luck, and we are excited that our program continues to grow each year and we can offer more individual sports and more sports for the athletes.”

Tony Wolfe has been a member of the Qualla team for many years and competed in the walk/run and softball throw on Friday.

“It’s an honor to be here,” he said.  “There are so many people that support special needs people, and we have a really good turn-out from Qualla Boundary.  It seems that we’re continuing to grow every year. It’s just a big honor.”

Wolfe said the Special Olympics means a lot to him, “Just fitting in and being a part of people like who we are and having a chance to show what we can do.”

Friday’s event began with a Parade of Athletes which was led by the running of the torch by Macon County law enforcement officers and followed by the individual groups including: Cherokee County, Graham County, Macon County, Clay County, and the Qualla Boundary. 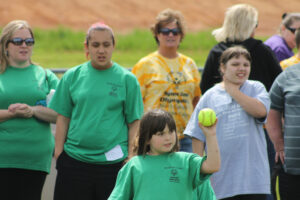 Qualla Boundary athlete Sunshine Rauch smiles as she gets ready to throw in the girls softball throw.

Macon County Commissioner Ronnie Beale took a moment to recognize the caregivers.  “If not for them, we would not be here.  The caregivers are folks who do this day in and day out.  They make these kids and young adults who they are today.  So, caregivers, we cannot thank you enough.  You do this with very little thanks.”

Boy Scout Troop 235, along with several members from the Knights of Columbus, presented the colors and led everyone in the Pledge of Allegiance.  They were followed by a group called Singing Angels who led the National Anthem.

Leanne Webb, of the Macon County program, officially opened the games by leading the athletes in the Special Olympics Oath, “Let me win.  But, if I cannot win, let me be brave in the attempt.”

Tim Smith has been involved in the Qualla Boundary Special Olympics program for many years as a volunteer and as a father to athlete Jacee Smith.  “It’s meant a lot to us.  I’ve got two older cousins, Charlene Jackson Otter and Keith Wolfe, who were Special Olympics athletes…I’ve got a cousin here, Robert Kanott, he participates.  It’s really been a big part of us.”

“We’ve been involved in this for years, and we’re just glad that she (Jacee) gets to participate and all of these kids get to get out and participate, and that’s what we really like about it.  Everybody wins, and everybody has a good time.  We just like to see the smiles on everyone’s faces.”