Four Swain County High School athletes signed letters of intent on Wednesday, May 1 to play sports at the next level.  EBCI tribal members Will Ferguson and Cody Dills joined fellow Maroon Devils Sean Webb and Tyler Wike at the signing.

Ferguson signed to play football for Southern Virginia, a Division III school located in Buena Vista, Va.  “It just feels great to be able to play at the next level,” he said.  “I just love the game.  It’s all I want is just to play in college.”

Swain head football coach Neil Blankenship commented, “Will was a three-year starter for us on offensive line. He played two years at center and another year at guard.  He was just a great solid football player for us.  He was always consistent.  He was committed at practice every day.”

Blankenship said Ferguson will be a great asset to Southern Virginia’s football team.  “They are getting a great player, and I think he’ll do well up there.” 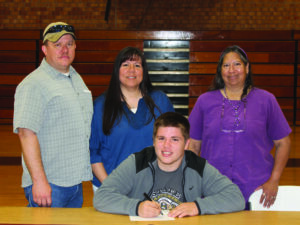 EBCI tribal member Will Ferguson (seated) signs a letter of intent on Wednesday to play football for Southern Virginia as his family looks on including (standing left-right) his father, Neil Ferguson; his mother, Juliet Ferguson; and aunt Iva Mills.

Ferguson’s mother, Juliet Ferguson, noted, “He didn’t think he’d get to play football anywhere and Southern Virginia wanted him.  He has an intense workout he has to do this summer.  He’s ready to go.  He wanted to play football and go to college so this is the best of both worlds for him.”

His father, Neil Ferguson, said, “I’m very proud and excited.  It’s what’s going to help keep him in college.  It’s his driving force.  We are just very excited that he has this opportunity.  It’s a real blessing.”

Dills signed to play baseball for Belmont Abbey, a Division II school located in Belmont.   “It feels really good,”he said.  “All of my hard work has paid off, and I’m just happy to be able to play at the next level.  That’s all I’ve really ever wanted to do.”

His mother, Kelly Dills, commented, “He’s made us very proud.  He’s worked very hard with all of the extra hours and time and just the dedication that he’s put into baseball over the years has paid off.  We’re very proud.”

Tommy Dills, Cody’s father and one of his baseball coaches, added, “It’s just been a life-long pursuit of his.  He has always wanted to do this, and I’m just glad he’s getting the opportunity.  He’s worked hard.”