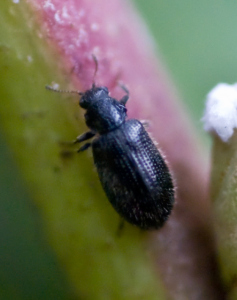 An adult Laricobious beetle is one of two that will be released in the Great Smoky Mountains National Park to help combat pests destroying Hemlocks. (NPS photo)

The park began releasing predatory beetles, which feed exclusively on adelgids, as a biocontrol in 2002. Park managers are hopeful that the addition of these two new beetle species will further enhance our bicontrol treatment program. Both beetles, Laricobius osakensis and Scymnus coniferarum, will be released at biocontrol sites throughout the park. L. osakensis beetles come from Osaka Japan where the Smokies strain of HWA originated. S. coniferarum beetles come from Washington where a similar HWA species occurs and has been kept in check by natural beetle predation.

Park managers currently utilize two other beetle species for HWA control including Laricobius nigrinus from Washington and Sasajiscymnus tsugae from Northern Japan. Both of these species are established in the Park and are increasing in numbers and in their ability to control HWA. In the long term, Park managers expect beetles to control HWA as populations reach a natural balance as they have in Washington, British Columbia, and Japan.

The park employs a three-prong approach in managing HWA that includes foliar applications of horticultural oil in developed areas, stem and soil injections of systemic insecticides (imidacloprid or dinotefuran), and the release of predatory beetles. All of the chemical and biological control techniques are showing positive effects. Currently about 600 acres are being sprayed annually, over 250,000 hemlock trees have been hand-treated with systemic pesticides spread across 11,000 acres, and over 545,000 predatory beetles have been released.