Cherokee history is rich with stories and legends. This story is one I am compelled to share as a symbol of the Cherokee people’s strength, survival, endurance, and courage.  It is a story that you could be involved in, a story that affects us all.  It tears at the heartstrings and gives us pause to wonder and question how human beings can be so presumptuous. 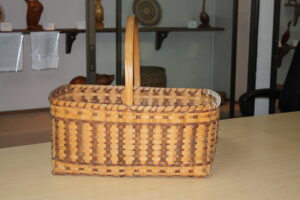 A white oak basket sts inside the Bureau of Indian Affairs offices on the Qualla Boundary in Cherokee, North Carolina. The basket is faded, yellowed, and worn with a string holding it together at one end. It sits in plain sight next to carvings created by famous Cherokee artists Amanda Crowe and Virgil Ledford. No artist is associated with this basket, no name is written on the bottom, but this basket has a troubling past.

The basket was purchased by the Bureau of Indian Affairs personnel and presented to the Social Services Department. Cherokee babies, days old, were placed in this basket and carried down the hill from the Cherokee Indian Hospital to the Bureau of Indian Affairs building. From there, children were placed in non-Indian homes by the Catholic Church, the Child Welfare League of America, the Florence Crittenton Homes, or an adoption agency from New York.  None of the children were placed in Cherokee or Native American homes.

In the 1950’s the Social Services department was under the Bureau of Indian Affairs (BIA). Social Services personnel believed they were responsible for seeing “that the Indian people were given ample opportunity to succeed in the non-Indian world.” Social workers would take it upon themselves to go to the Cherokee Indian Hospital when a baby was born there they coerced and manipulated parents into giving up their children. Social Workers would tell the parents they were not capable of taking care of a child, that it would have a better life off the reservation and that it would surely be the child’s demise if left with the family. Mother and fathers, threatened by the lack of economic opportunities and the pressure to survive on the Qualla Boundary gave up their children for adoption. Parents were left distraught, wanting the best, fearing the worst. Those who did not go along with adoption feared Social Services would continue to pressure the family and eventually take their child. This brought more grief to the families.

“It is estimated more than one quarter of all Indian children were removed from their families and placed into white adoptive and foster homes or orphanages before the Indian Child Welfare Act of 1978 (Child Welfare League of Americas, 2000).” Approximately, 30 Cherokee babies taken from mothers placed in the Florence Crittenton Home for Unwed Mothers were adopted into non-Indian homes.  The United States Government had no problem admitting to abolishing native cultures through removal of religion, education, and obviously native families. They called this acculturation.

Looking at the basket, I wondered how many babies taken from their mother’s arms and their father’s gaze were carried off the Qualla Boundary in this basket. I cannot imagine the mindset of Cherokee mothers and father told they were unfit and unable, to raise their own child; that as a parent, you could not prepare your child for the outside world. We may never know how many families were affected or how many lives were changed, or where those children are now.  We do know that children adopted between 1958 and 1967 would be from 46 to 64 years of age.  We know that the Florence Crittenden organization still exists today.  Many questions need answers and much research is needed. Perhaps you were one of the babies in the basket; perhaps it was someone close to you.

The white oak basket represents one of the Cherokee people’s most noted and enduring traditions. It represents strength, adaption, history, survival, beauty and love.  The white oak basket that sits at the BIA, reminds us of a time in our history kept quiet, known, but not discussed, forever leaving its mark on our children, parents and grandparents, forever leaving its mark on our hearts.