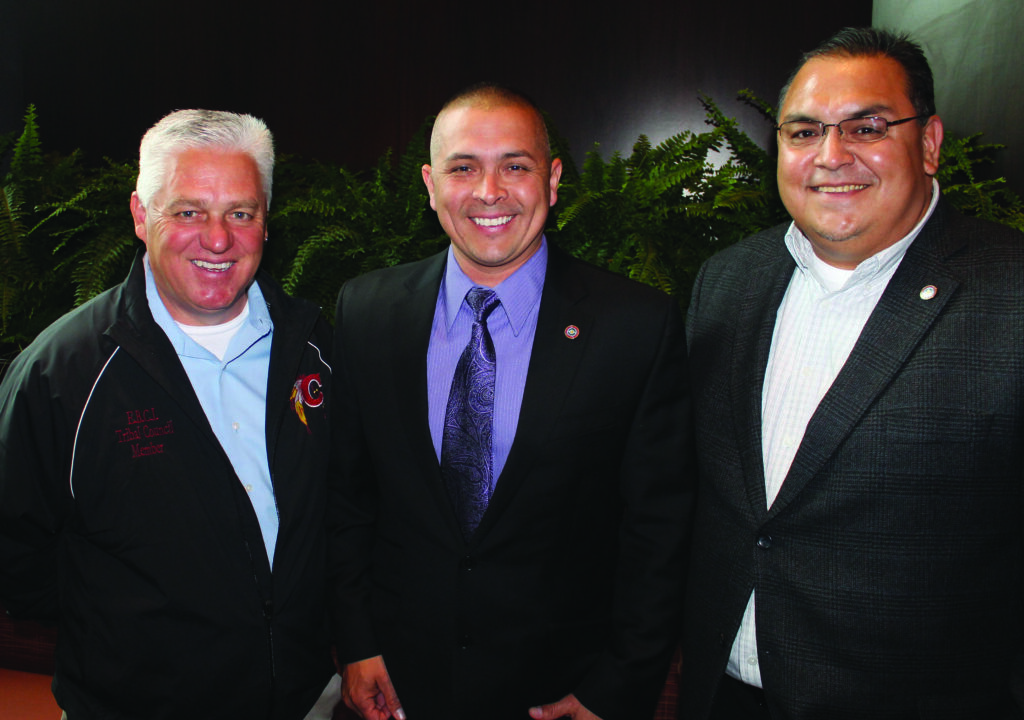 Ground was broken on the third hotel tower for Harrah’s Cherokee on July 10, 2009.  That event marked the beginning of the $650 million expansion which is now complete and culminated in a grand opening event on Friday, March 22. 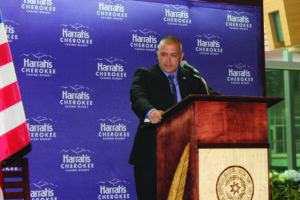 Principal Chief Michell Hicks said, “At the end of the day, the benefits of what we’re doing is about protecting ourselves, protecting our sovereignty, but to make sure that we are taking care of our community.  That’s what Cherokee has always been about.”

“We’ve invested over a billion dollars.  A lot of governments are known as spenders.  We like to be known as investors.  The bottom line is helping people.”

Chief Hicks went on to say, “I’m just proud of what we’ve been able to accomplish.”

Tribal Chairman Jim Owle stated, “The greatest thing about the expansion is what we now have to offer to our customer, to our vendors, our Total Rewards customers coming in here, and also the things we have to offer back to the tribal members.”

He said a lot of services and programs for seniors, youth, schools, etc. have come to fruition as a result of the casino.  “It’s just been a great asset for this Tribe and always will be.  I’m hoping to look forward to things in the future that we can do for our Tribe.” 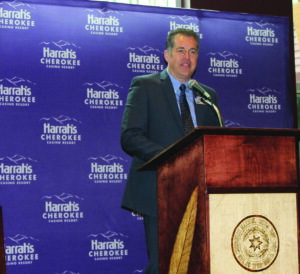 Brooks Robinson, Harrah’s Cherokee senior vice president and general manager, commented, “Over the past few years, we have completed a $650 million expansion here at Harrah’s Cherokee making it the premier destination in the southeast.  It’s a world class tourism and entertainment attraction.”

Robinson related that the resort now has three hotel towers with 1,100 rooms making it the largest hotel operation in South Carolina and North Carolina.

“Instead of being just a day-trip operation, we are now, in the southeast, the largest destination resort, and that’s something that we’re so proud of.”

Robinson said the gaming space has expanded, or rather doubled, to 150,000 square foot.  “We could pick this property up and sit it on the Las Vegas strip and it would compete.”

The gaming space includes over 4,100 slot machines, over 100 table games, and a poker room that will host a World Series of Poker event next month.

“We’re so very proud of this masterpiece we’ve built here.” 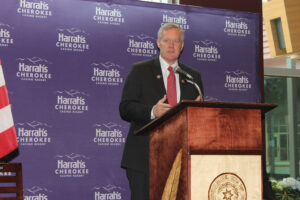 Congressman Mark Meadows (R-NC) attended Friday’s event and congratulated the casino and Tribe on the expansion.

“I’ve seen this property truly transform from what used to be a regional day-trip casino into a world-class destination resort,” said Scott Barber, senior vice-president and general manager Caesar’s Entertainment.  “It’s just quite a tribute to the Chief and Tribal Council and all the members of Cherokee to have the courage, foresight and vision to make this investment.”

Congressman Mark Meadows (R-NC) was in attendance at Friday’s grand opening event and remarked, “What I am particularly impressed with is not only the vision, but the opportunity to truly plan this out to make sure that a vision became a reality.”

Rep. Meadows said that western North Carolina faces very high unemployment that the casino helps to combat.  “Because of the investment that’s been made here, we’ve seen lower unemployment, we’ve seen jobs that have been created.”

He praised tribal leadership for the expansion.  “It’s the leadership of the Tribal Council and Chief that have not only put forth the investment, but have maintained a culture throughout this region.”

EBCI Department of Commerce director Jason Lambert noted, “With the expansion and the resort destination, from a commerce perspective it’s a very big tool we can utilize to further grow businesses and business activity throughout town.  Whether it’s business recruitment or destination marketing, we’re able to use that across the board.”

Lambert said the casino is a business catalyst for the entire region.  “It gives us legitimacy in the game as a destination.”

As part of the grand opening festivities, Darius Rucker is scheduled to perform on Friday, March 22 with Blake Shelton scheduled for Saturday, March 23 and Alicia Keys on Wednesday, March 27.