“Native Americans have the third highest rate of HIV in the U.S.,” read a placard at an event hosted by Cherokee Community Health at the Acquoni Expo Center on Thursday, March 21 to celebrate Native HIV Awareness Day.  The official day was Wednesday, March 21, but Cherokee’s celebration was held a day later so that special guests from the University of Tennessee – Knoxville nursing program could attend. 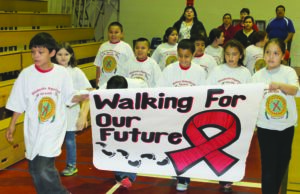 Aneva Hagberg, EBCI Health and Medical Division health operations director, said that awareness and education about HIV/AIDS was the main focus of Thursday’s event.  “When people, a lot of time, mention AIDS it’s a phobia type thing and they don’t have confidential people that they can ask how to do testing and other things.  We want to make the community more aware and to recognize that it is something that is here…the best practice is to know the right message.”

Information provided at the event states that 21 percent of people who have HIV are unaware that they have the disease.  Therefore, testing awareness was a large part of the event.

“HIV, currently, is no longer a disease that will take your life,” said Belinda Wilson, Cherokee Community Health nurse.  “If you get into treatment early, you can actually turn it into a chronic disease and live with it until you have a natural end to your life.  But, it’s important for people to get tested now and tested frequently and control this just like they would any other chronic disease.”

Wilson, who is also a certified HIV counselor, can administer a free oral HIV test at Cherokee Community Health located behind the Cherokee Boys Club.  She said tests can be administered anonymously or confidentially – the different being that confidential tests results will be given to the person’s medical practitioner if they wish.

The test involves a mouth swab and only takes 20 minutes.  “I can give them a preliminary result within 20 minutes,” said Wilson who related that a second test if performed if a positive result occurs to ensure accuracy.

And, the tests are not just for adults.  “I can legally test, without parent consent, down to the age of 12,” she said.

Jerry Wolfe, EBCI tribal elder from Yellowhill, said at the opening of Thursday’s event, “Today is for good health; to taking care of our bodies for a long, healthy life.”

Students in the 2nd and 3rd grades at New Kituwah Academy sang three songs in the Cherokee language and then led an HIV Awareness Walk in the old Cherokee High School gymnasium.

The HIV National Day of Testing is set for June 27, and EBCI Health & Medical Division is planning an event with details forthcoming.