There are over 2.3 million Total Rewards card members in a 180-mile radius of Cherokee, but only 20 percent have ever visited Harrah’s Cherokee Casino Resort.  The Tribal Casino Gaming Enterprise (TCGE) hopes that building a casino near Murphy in Cherokee County would help the Eastern Band of Cherokee Indians get some of their gaming revenue.

After holding a series of meetings in the various tribal communities, the TCGE Board held a public meeting, along with Tribal Council, on the Cherokee County Casino proposal in the Council House on the night of Monday, March 18. 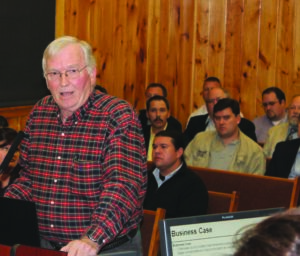 John Houser, TCGE Board, speaks during a public meeting held in the Council House on the night of Monday, March 18 to discuss the Cherokee County casino proposal. (SCOTT MCKIE B.P./One Feather)

Principal Chief Michell Hicks opened the meeting saying he’s been behind the project since he put in a 2008 resolution on the idea.  “I think it’s coming to fruition.  It looks very promising especially with the Atlanta, Chattanooga, Birmingham traffic.”

Chief Hicks said that one of the things he and others fought for in the new gaming compact was the ability to have another casino.  “I just think it makes sense.  And, now it’s time to move forward.”

The TCGE Board worked with The Innovation Group to set up some projections on the project, and based on those per capita would increase $579 in the first year and $694 in the second.

“The bottom line for this project overall is the revenue opportunity,” said TCGE board member John Houser.  “It gets us one hour closer to vital markets.  The market opportunity and the population are wonderful.”

In previous community meetings, the TCGE Board presented several possible debt reduction plans including one whereby 100 percent of the proceeds from the Cherokee County casino would have gone directly into debt reduction and zero going to distribution and per capita.  That idea has been abandoned, and the current system of distribution would be used at the Cherokee County casino if approved.

“The revenue from the casino in Cherokee County will be distributed identically as the one here,” said Houser who related that a temporary casino could be operational within six months of breaking ground and a permanent facility online 12 months afterwards.

Big Cove Rep. Bo Taylor said he has talked a lot with his constituents on the idea, “Their question is why do we need to go so full out?  What’s the justification with going so full out with the hotel and all the amenities?”

Houser said the proposed casino is actually a scaled down version of what the TCGE Board was thinking of originally.  “This version will only have 300 rooms and 1,100 games.  The market study calls for a larger casino.  The market potential for that project is greater than here in Cherokee.”

Becky Walker, an EBCI tribal member from Wolfetown, said she is leery of projections and referenced the alcohol projections from 2009.  “Those numbers didn’t come to fruition.  It’s really hard now to hear these projections.”

Painttown Rep. Terri Henry agreed with Walker, “Some say that this looks good, but they don’t trust ya’ll because of some of the other projects.  I just think the trust factor is a very big factor here.”

She said a referendum vote would be the best way to proceed on the project.

Jimmy Bradley, an EBCI tribal member from Yellowhill, agrees, “To me, it is a referendum issue.  I just think there are some things that are bigger than the 12 of you and two Chiefs.”

The Cherokee County casino would cost $110 million to build, and some at Monday’s meeting related they are afraid of more spending and debt.

Missy Crowe, an EBCI tribal member from Yellowhill, noted, “What I hear a lot is that it’s time to tame the beast.  The beast is the money.”

“No one has mentioned the people,” she said.  “We’re going to have to start talking with one another.  If it goes down, we’re all in this together.”

“To me, the biggest issue is employment,” said Abe Wachacha, former Cherokee County – Snowbird representative.  “You’ve got to live down there to understand what I’m talking about.  Give us the opportunity.”

Cherokee County recently reported an unemployment rate over 12 percent and nearby Graham County, which includes the Snowbird Community, has the highest rate in the state at over 16 percent.

Kim Lambert, Cherokee VOC manager, commented, “We need jobs.  If gaming is the way this can be accomplished, then I’m all for it.  It is imperative that we provide employment opportunities for all of our tribal members.”

Lumpy Lambert, Harrah’s Cherokee assistant general manager of casino operations, said, “At the end of the day, we have to look at what’s best for the Tribe, and I believe that this is a project that does it.  It’s going to create jobs.”

Paxton Myers, Harrah’s Cherokee vice-president of casino marketing, related, “This project makes business sense.  I know this is a good project.  It is time to help our brothers and sisters in the Cherokee County and Snowbird area.”