A special case has been set up at Qualla Arts & Crafts honoring Betty Dupree that includes a painting of her by Gary Montgomery and several baskets that she made while in high school. She was remembered during at event at the store on Thursday, March 14. (SCOTT MCKIE B.P./One Feather)

Betty Craig Dupree, a long-time manager at Qualla Arts & Crafts who passed away last year, was honored during an event at the store on Thursday, March 14.  Not only did she help advance Qualla Arts & Crafts, but she took Cherokee crafts worldwide, literally. 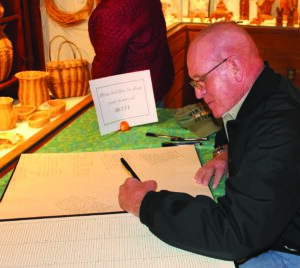 Warren Dupree, Betty’s son, writes a personal story in “The Legend of Betty Dupree”, a collection of stories from family and friends, during Thursday’s event.

“My mom was totally dedicated to the Eastern Band of Cherokee Indians,” said Warren Dupree, Betty’s son.  “The strength that she had was an inner strength.  She was a woman of small stature, but her inner strength allowed her to stand up and do what was right.  She stood up for those that needed her help and assistance.  She was a very demanding woman, but she taught us how to be strong and how to do the right thing, never turn your back, never walk away, to work together.”

Warren added, “She was a true inspiration not only to her family, her children, but to all of those around her.”

At Thursday’s event, friends and family were encouraged to write down their memories and stories of Betty into a book entitled “The Legend of Betty Dupree”.  A special case has been set up at Qualla Arts & Crafts honoring Betty that includes a painting of her by Gary Montgomery and several baskets that she made while in high school.

Davy Arch spoke about Betty and her influence on his artwork.  He related that she got him involved in Qualla Arts & Crafts in the 1970s.  He recalled taking some of his items to Betty as he began his carving career.

“I’d take something to Betty and she’d critique my work and I got some serious advice from her,” he said laughing.  “Betty could see that I was becoming an artist in my own right, was interested in the culture, and she tried to foster that in me as well.”

“She was able to connect with the older artists…and take those people up a knotch or two and help get them out to Washington and these big shows to get them some exposure and try to build up their reputation.”

Arch said Betty had a clear understanding of artists and what it took to be an artist.  “So, when you came in, if you didn’t have something that was up to standard, she’d tell you and send it back home with you and to bring it back when it was something that could be marketed on the floor.  She had that kind of vision.”

Wilbur Paul serves on the Qualla Arts & Crafts board and is a beadworker in his own right,  “She was a person that told it like it was. I liked Betty as an individual.  She was not only involved here.  She was involved in the community.”

Paul worked in Washington, DC at the Department of Interior prior to coming to the Cherokee BIA Agency, and he said that while in the Washington office he would often see Cherokee made crafts that were a direct result of Betty’s marketing efforts.  “She helped make the Cherokee crafts well-known in the U.S. and the world.  She’s just a wonderful person, and we’re going to miss her.”

During Thursday’s event, Vicki Cruz, Qualla Arts & Crafts manager, unveiled a glass etching by EBCI artist Joel Queen that was attached to a vintage podium honoring Betty.  “She was great to work with and we loved her,” said Cruz.

At the end of the event, everyone in attendance was treated to two of Betty’s favorites: Mexican food and cake from Lil’ Harvey’s.