Cherokee went three-and-out to start the game.  Swain got going early in the bottom of the first as Kirkland hit her first of two dingers bringing in two runs to lead 2-0.

In the bottom of the second, Swain’s Nikki Cody hit a double bringing in one run to make it 3-0.  Then, Kirkland stepped up and hit her second home run of the game bringing in Cody and herself to make it 5-0.

The Lady Braves got something going in the top of the third as Ashley Bottchenbaugh walked.  Sarai McMillan was hit by a pitch to put runners on first and second.  Then, Bree Smith did a nice sacrifice bunt to move the runners around to second and third.  But, then the rally stalled and Cherokee left the runners on base to end the inning.

Swain would add another run in the bottom of the third as Karie Jones got on base with a single and then stole second and third and ran home on a wild pitch to make it 6-0.

Cherokee got on the board in the top of the fourth.  Ashlee Smith started it off with a walk.  Lacy Arch doubled and Smith ran home for what seemed like a run, but the umpire said she missed the home plate and she was called out.

That didn’t phase the Lady Braves though as Gabby Thompson stepped up next and hit a driving single that brought Arch home to make it 6-1. 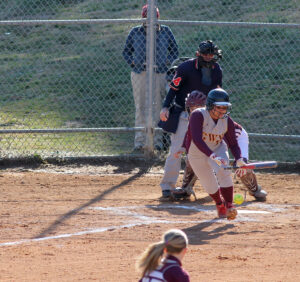 Bree Smith lays down a nice bunt that advanced runners in the third inning of Tuesday’s game.

The Lady Maroon Devils scored two more in the bottom of the fifth and the game was called at 11-1.

Prior to the game, CHS coach Barry Reed took a few minutes to speak to the One Feather about the upcoming season for the Lady Braves.  “I think we have a really good team this year.  I think we look really good as far as experience and comprehension of the game.”

Reed said that defense will be the strong point of this team.  “We’ve got good pitching.  We’ve got good catching.  I think we’re going to be pretty tough as far as that’s concerned.”

“Our hitting is down a little bit, but hopefully it’ll start coming around.  We haven’t had that much time outside…it’s been too wet.”