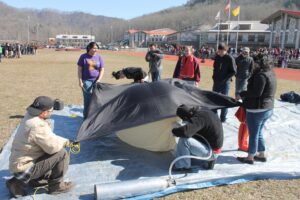 “Last week, they came and brought the kit and showed them (students) all the parts of it,” said Jackson.  “And, they got to weigh everything because there is a certain weight that must be on it.  We’ve just been waiting for today to set it off.”

Jackson said the balloon was set to reach the “edge of space” right at the top of the Earth’s atmosphere.

The students put several personal items into the cargo bay of the balloon including a pair of Cherokee silverwork earrings belonging to Welch and a Cherokee cornbead necklace belonging to Crowe. 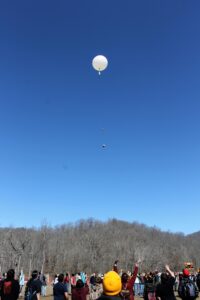 “This is the first time a Native American tribe has set off a weather balloon,” she commented, “It has three cameras attached to it so as it goes up, it will get the entire Qualla Boundary on film and we’ll get the curvature of the Earth once it gets high enough.  Then, it will come back, and we’ll be able to take the footage from the cameras and the tourism department is going to put together a little video of it.”

Jackson said she was very proud of her students for their involvement in the project.  “They’ve been talking about it since we were asked to help.  They’re very excited.”

Crowe said that he and his classmates were asked to do calculations on wind direction and velocity for the launch.  “We believe it will land near Knoxville, and it should reach between 110,000 to 120,000 feet.  We’re excited to get it going and look forward to seeing where it comes down.”

“It’s definitely a first for me, and I’m glad that the kids have discovered this opportunity to gather some information, and I’m hoping that this leads to bigger and better things as it leads to the weather and forecasting,” said Principal Chief Michell Hicks.  “This is exciting stuff.”

Cherokee High School students spelled “GWY” (Tsalagi) on the field for the camera aboard the balloon to photograph.  In addition to the balloon, a helicopter flew over the field to photograph the students, and that photograph will be used on the cover of the next Annual Report by Chief Hicks.