GREENVILLE, SC – Furman’s Shelby Parker, an EBCI tribal member, has been named Southern Conference Pitcher of the Week after posting a 1-0 record and 0.91 earned run average in four appearances.  It was announced on Monday, March 4 by the league office. 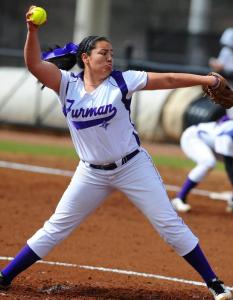 The sophomore righthander began the week by allowing just one earned run in one and 2/3 innings of relief while fanning four batters in a doubleheader at USC Upstate on Wednesday, Feb. 27.  On Friday, March 1, at the Combat Invitational in Rock Hill, S.C., Parker tossed five innings of four-hit, shutout ball to guide the Paladins to a 4-0 victory over the Rhode Island Rams.  She capped her week by tossing a perfect inning with a strikeout versus Monmouth later in the day.

Parker finished the week allowing just one earned run on seven hits while striking out 12 batters in seven and 2/3 innings of work.