The Eastern Band of Cherokee Indians is the first federally recognized Tribe to receive a Presidential Disaster Declaration since the Stafford Act was amended through the Sandy Relief Act this past January. The amendment to the Stafford Act allows American Indian Tribes to apply directly to the President through the Federal Emergency Management Agency (FEMA) without application through their respective state. The EBCI worked cooperatively with North Carolina Emergency Management to document damage and create its request to FEMA for a disaster declaration. 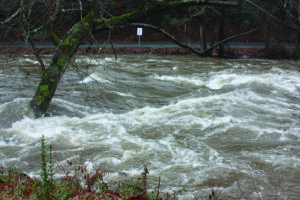 Heavy rains on Jan. 14-17 resulted in flooding in parts of Cherokee, and as a result, the Tribe has been the first American Indian tribe to receive a Presidential Disaster Declaration under the Stafford Act. (ELVIA WALKINGSTICK/One Feather)

“We did not necessarily anticipate being the first Tribe to receive the declaration. But I think through the recent disaster that we had with all of the flooding, we’re glad that we could set a stage for other Tribes throughout the nation,” Principal Chief Michell Hicks said in response to receiving the news from FEMA.  “The unfortunate part of this is that we have the damage. The fortunate part of this is that we are helping to set a good precedent for Tribes to seek assistance working directly with the President through FEMA. This sets a real good precedent for Indian Country.”

The announcement that the EBCI received the declaration was made to the Tribe’s Emergency Management Office Friday, March 1.  The request for the declaration was made by the Tribe on Valentine’s Day in response to damage that occurred on the Cherokee Indian Reservation in January from torrential rainfall. The Tribe experienced approximately $3 million dollars in damage to homes and public infrastructure according to Cherokee Emergency Management Manager Mollie Grant.

“FEMA will come back to Cherokee and do final damage assessment,” said Grant.  “The amount of damage initially reported is an estimate. The final assessment will be more accurate and will be the basis of FEMA’s assistance to the Tribe. This will also enable us to apply other mitigation funding.”

Grant says that FEMA has informed the EBCI it will be on the Reservation this coming week to begin the final assessment work. The Tribe is also working very closely with Richard Flores, FEMA Special Advisor for National Tribal Affairs to coordinate the final assessement.

During the days of Jan. 14-17, the Qualla Boundary (Cherokee Indian Reservation) had 17 inches of rainfall which resulted in multiple mudslides and severe flooding. The damage also include destroying a 200 foot section of the U.S. Highway 441 through the Great Smoky Mountains National Park, which is the highway that connects Cherokee and Gatlinburg, Tennessee. The Great Smoky Mountains National Park is the most visited national park in the country. The damage and replacement to that section of highway is approximately $7.2 million according to the Tribe.

FEMA Administrator Craig Fugate told the United South and Eastern Tribes, Incorporated (USET) Board of Directors at its annual Impact Week in Washington, DC the quest to have the Stafford Act amended to give Tribes the ability make requests for disaster declarations and federal assistance directly rather than getting state approval first was going to be an impossible task.

“We (FEMA) came around to the idea that this was the right thing to do. It was mainly a benefit to recognize the trust relationship with the Tribes,” Fugate told USET. He added that there was no benefit for FEMA to support such a change. In fact, it added more work to the FEMA staff. Prior to the passage of the Sandy Relief Bill last month, there were only 54 states or territories that could make disaster declaration requests. Now, that many governmental bodies plus over 500 Tribal Nations can make that request.

Fugate says leadership from President Obama was paramount to help make the change because the White House had meaningful consultations with Tribal Nations.

USET President Brian Patterson gave praise to FEMA and the White House for its work to bring new opportunity and renewed strength in Tribal sovereignty. “It is not often that we advance a piece of legislation that is born to support self-determination. It is with that thought we are grateful for progressive leadership and from the President (Obama) to make effective change in the Stafford Act that will ultimately strengthen Tribal sovereignty and to allow Indian Country to preserve public health and safety.”

Patterson emphasized that this is great example of how Indian Country and the federal government are building and strengthening trust responsibilities and government to government relationships.