Heavy machinery and dump trucks are in full swing on Wednesday, Feb. 27 at the site of a January landslide in the Great Smoky Mountains National Park that has closed US 441 connecting Cherokee to Gatlinburg, Tenn. (SCOTT MCKIE B.P./One Feather photos)

Heavy machinery and dump trucks are in full swing at the site of a January landslide in the Great Smoky Mountains National Park that has closed US 441 connecting Cherokee to Gatlinburg, Tenn.  Phillips & Jordan, Inc., of Robbinsville, was recently awarded a $3.9 million contract from the Federal Highways Administration to rebuild the road.

“They have extensive experience in landslide repair,” said Dana Soehn, Park spokesperson.  “They have completed several projects in the North Carolina area including landslide repair along the I40 mountainous corridor…they have a wealth of experience for exactly the type of work that is required to complete this project.  They have an excellent track record of completing projects on-schedule, on-time and very safely.” 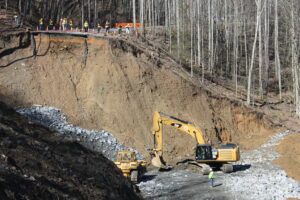 Reporters from Tennessee, shown on the far bank, give some depth and scale to the enormity of the landslide area.

The deadline for completion is May 15, and the Park has partnered with the Eastern Band of Cherokee Indians to offer incentives for early completion.  The contractor will receive a bonus of $18,000 a day for each day the project is completed early up to a total of $500,000 if they are finished by April 15.  Conversely, they will lose $18,000 per day if they go over deadline.

“We’re hopeful that the project will be completed early,” said Soehn.  “Certainly, we feel very confident that they will meet the May 15 deadline.”

Soehn related that APAC – Atlantic, Harrison Division, who was awarded the initial contract for site preparation, completed their work on Friday, Feb. 22.

“They have gotten the site prepared by building a haul road,” she said.  “They also stabilized the base of the slide site so we’d be more ready to start fill operation.  They also helped with installing some of the erosion control structures.”

Soehn said that Park officials have worked with contractors to stabilize the slope including installation of erosion matting and seeding of the fill area with a rye grass.  Other native grasses, along with trees and bushes, will be planted in the area in the coming weeks and months to help further control erosion.

As APAC finished their work, Phillips & Jordan began theirs by mobilizing equipment and bringing materials to the site.

The main work to be accomplished is the construction of a “reinforced fill” which will be layers of crushed stone with a geosynthetic material layered every three to four feet.  Soehn said around 40,000 cubic yards of crushed stone will be used in the project.  The stone is from the Nantahala Quarry and has been checked, along with the topsoil to be used, to make sure it doesn’t include any invasive plant species.

Phillips & Jordan is currently clearing debris and beginning to build the base of the reinforced fill.  As of Wednesday, Feb. 27, they had completed 15 feet of the base and had another 50 feet to go.

The contractor has been given permission to work around the clock, but they have not started with that schedule yet.

The landslide occurred during a period of heavy rains on Jan. 16.  According to NPS officials, a total of 90,000 cubic yards of material slid off the hill during the slide.