CULLOWHEE – A new book by Anna Fariello of Western Carolina University’s Hunter Library examines carvers active among the Eastern Band of Cherokee Indians in the early to mid 20th century. 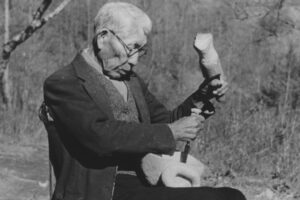 A new book by Anna Fariello of Western Carolina University’s Hunter Library examines Cherokee carving. Here, the late Will West Long, an acknowledged authority on Cherokee cultural traditions as well as a renowned mask maker, uses a mallet and chisel to rough out the form of a mask. (Photo courtesy of the Museum of the Cherokee Indian)

The 66-page “Cherokee Carving,” on sale through the Qualla Arts and Crafts Mutual and the Museum of the Cherokee Indian, gives an overview of carving as a Cherokee tradition, including the creation of pipes, masks and figures, and touches on the bas relief technique, which produces a two-dimensional image on a flat plane. The last half of the book is devoted to short biographies of nine individual Eastern Band carvers.

Most of the carvers concentrated on wood, although one, the self-taught John Julius Wilnoty (b. 1940), is famed for his work in stone. Many spent their formative years on the Qualla Boundary while others, such as Goingback Chiltoskey (1907-2000), Amanda Crowe (1928-2004) and Will West Long (1870-1947), spent years away from Cherokee while they honed their skills. Crowe, for instance, the lone female featured in the book, studied sculpture in Mexico with Jose de Creeft, the artist who created the Alice in Wonderland statue in New York’s Central Park.

Here, a mule head carved in walnut by Watty Chiltoskie, one of nine carvers whose biography is included in ‘Cherokee Carving.’ (Photo courtesy of the Southern Highland Craft Guild)

The study “does not intend to produce a comprehensive account of carving on the Qualla Boundary, as such a survey would require a more lengthy pursuit,” said Fariello, an associate research professor who oversees the digital archives housed at Hunter. “Instead, this publication aims to initiate and inspire the next generation of scholars to learn from local tradition bearers, discover their stories, and reflect on their values.”

“Cherokee Carving” is the third and final installment of the “From the Hands of our Elders” series authored by Fariello to document Cherokee arts. First in the series was “Cherokee Basketry,” published in 2009, followed by “Cherokee Pottery” in 2011. The basketry and pottery books are available locally and have both recently been reissued as electronic books available for purchase through Amazon.

“Research for each book produced some surprises and a better understanding of the crafts it portrayed. It has been my pleasure to uncover the traditions, artistry and stories of many of Cherokee’s best craft-makers. As it should be, the Cherokee language makes no distinction between art and craft,” Fariello said. 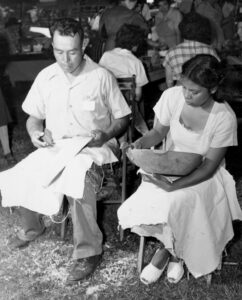 As she did with her previous works, Fariello drew heavily on the archives and collection of the Qualla Arts and Crafts Mutual, an artists cooperative for members of the Eastern Band, for information included in the carving book. Vicki Cruz and Tonya Carroll of the Qualla Arts and Crafts Mutual, which has more than 250 members and aims to preserve and promote the traditional arts and crafts of the Eastern Band, worked closely with Fariello and other Hunter Library staff and family members of the carvers to ensure the accuracy of personal biographies.

The books are a valuable resource and have been embraced in the community, said Cruz, manager of the cooperative. In addition to their role as histories of craft, the books serve as a reference for collectors and as companion pieces to purchased artwork. They also have helped Arts and Crafts Mutual staff identify the artists, or family of artists, behind unsigned work brought in by collectors, and such identifying information adds values to a piece, Cruz said. Community members value the books for their information about family relations. “They enjoy going back and tracing who they may be related to. It’s like a genealogy book, too,” she said.

The book is dedicated to Betty DuPree, a longtime manager of the arts cooperative who tirelessly promoted Cherokee artisans.

Many at WCU contributed to the production of the carving book. Tom Frazier and Clint Hardin of the University Print Shop assisted with the book’s design and printing. Tom Belt and Hartwell Francis of the Cherokee Language Program provided translations of chapter headings. Robert Conley, the Sequoyah Distinguished Professor of Cherokee Studies, along with Conley’s wife, Evelyn, and Roseanna Belt, director of the Cherokee Center, assisted with clarifying cultural interpretation. Hunter Library reference librarian Ann Hallyburton and library technician Bob Strauss copyedited the book. Lucas Rogers, a digital production technician at Hunter Library, took many of the contemporary photographs and produced the initial documentation on each object in the Qualla Arts and Crafts collection. Some of the book’s numerous archival images came from Hunter Library’s Special Collections.

Hunter Library and the Cherokee Preservation Foundation provided funding for the series. As with the first two books in the series, teachers at Cherokee Central School and the Eastern Band’s language immersion school, Kituwah Academy, each will receive a copy of “Cherokee Carving” for the classroom.