I would like to take a little bit of your time to update you on things that I have been involved with over the past few weeks and the Cherokee County Casino that is currently being considered by Tribal Council.

The past few weeks have been very busy for me, after the Governor’s Inauguration I traveled to Washington, DC for United South and Eastern Tribes (USET) Impact Week.  Every year, I, along with several tribal staff and Council representatives, travel to Impact Week to rally support for issues relevant to the Eastern Band and all Tribes.  Impact Week gives us a unique opportunity to meet with Senators and representatives from Congress.  This year’s meetings were very productive as I was able to spend some time with House Majority Leader Eric Cantor.  We had an in depth discussion concerning the Violence Against Women Act, and I look forward to working with him on this issue and many others in the future.

The Tribal Casino Gaming Enterprise has been tasked with researching the feasibility of a gaming facility in Cherokee County per resolution #470 (2008).  TCGE presented their findings to Tribal Council as follows.  TCGE is proposing a facility that would include 1,000 slot machines, 40-50 tables, 300 hotel rooms, dining among other amenities.  This would create an influx of approximately 800 jobs at the Cherokee County operation.  It is projected that within the first year of operations this gaming facility would potentially produce a profit exceeding $50 million.  TCGE presented one possible option for the management of the earnings from this facility. 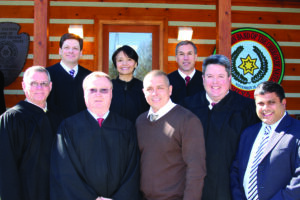 The Tribe would invest $110 million for this project and the initial proposal to Tribal Council would extinguish the debt for this facility in 2.5 years.  The earnings from this facility would then be re-directed towards paying off the Harrah’s Cherokee Casino Resort, saving the TCGE approximately $294 million in interest payments and would allow TCGE to be debt free within 11 years.  Additionally, the results of lower interest rates and debt would cause per capita to increase.  After presenting this proposal in Budget Council last week Tribal Council asked TCGE to share this plan with the Cherokee community.  I welcome your feedback and suggestions regarding this facility and the debt repayment plan that has been proposed.  I initially proposed this facility in 2008, and I continue to support this endeavor.

I would like to recognize Paxton Myers, who has been selected for the National Center for American Indian Enterprise Development Top 40 Under 40 Award.  This is a great honor and I would like to congratulate Paxton on this achievement.

Finally, I would like to offer congratulations to Jerry Wolfe, who was honored at USET for his service to the United States and for his service to the preservation of the Cherokee culture.  Jerry Wolfe, who served in the United States Navy during World War II, was recognized by USET for this service.  They also recognized his devotion to the people of the Eastern Band of Cherokee and his work towards the preservation of Cherokee lifeways and traditions.  On behalf of the Eastern Band, I would like to extend my gratitude for all his years of service.