The Lady Braves (22-2), the Smoky Mountain Conference regular season champions, ended their regular season with two more wins and a perfect regular season in the conference.  They defeated Swain 69-50 on Monday, Feb. 11.

Cherokee led 26-15 after the first period and 55-26 at the half.  Murphy came back a little in the third period outscoring the Lady Braves 21-15, but another 23pts in the final period sealed the game for Cherokee.

The Braves (12-10) lost a heartbreaker in overtime 64-53, after leading through three periods, to Swain on Monday, Feb. 11.  Seth Littlejohn led Cherokee with 13pts.

Cherokee led 18-13 after the first period and 34-25 at the half.  They extended that lead to 42-31 after the third period.  Swain outscored Cherokee 17-6 to tie the game and send it to overtime.  The Maroon Devils dominated in overtime outscoring the Braves 16-5 to take the win. 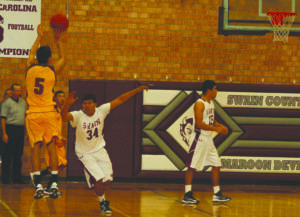 The Braves ended their regular season on a high note winning 73-50 over Murphy.  Seth Littlejohn led the way for Cherokee with 18pts.

The Braves dominated the first half, and took a 39-23 lead into the locker room.  They continued their assault in the third period outscoring the Bulldogs 22-9.  Murphy scored 18 in the final period, but it was not enough.