Cherokee Central Schools has announced the appointment of Cance Carnes to the position of interim principal of Cherokee Middle School. Carnes will serve as interim principal until the end of the current school year. He was chosen from a field of three internal candidates and has already settled into the day-to-day duties of the principal. 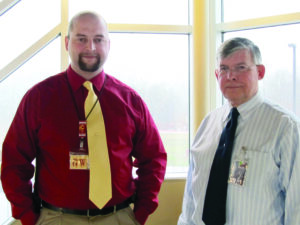 Carnes was the Cherokee Elementary Assistant Principal before deciding to apply for the interim position. He is knowledgeable of the Cherokee Community and has experience in student discipline and staff development. Carnes has all the qualifications that the school and community would like to see in a principal, and the current staff and students have welcomed him to the school.

Carnes has degrees including Bachelor of Science in Education, Masters of the Arts in Science Education, an Education Specialist Degree in Administration. He also has certification to teach Physical Science, Chemistry, Physics, Principles of Technology and Computer Engineering

Creasman related he enjoys working at Cherokee Middle School and looks forward to working with Mr. Carnes and continuing to work with fellow teachers.

“Cance replaces Rebecca Ensley who has chosen to take a position in the Jackson County School District, which allows her to be closer to her family. Rebecca did a good job for us and we are thankful for her 10 years of service to Cherokee schools.”