WASHINGTON – For almost 20 years, Indian Country has enjoyed the benefits that the Violence Against Women Act (VAWA) has afforded by funding training, technical assistance, and support to shelters for abused spouses.

Right down to the last gavel of the 112th Congress, USET Tribal leaders and VAWA advocates urged Congressional members to reauthorize the legislation with provisions that were in Senate Bill 1925 which authorized Tribal law enforcement and courts to arrest and prosecute non-Indians accused of violent and abusive acts against Tribal members.  USET Tribal Leaders and advocates are maintaining a vigil with the new Congress to see that legislation is adopted.  The new Senate legislation is embodied in Senate Bill 47 (S. 47) in the 113th Congress. 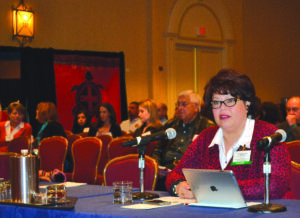 Painttown Rep. Terri Henry addresses the USET Impact meeting in Washington, DC on the issue of the reauthorization of the Violence Against Women Act. (USET photo)

In addition to Tribal Nations and Indian Country advocates, The White House has made VAWA reauthorization a priority.  “We’re really on the cusp of having the opportunity to do something major,” White House Deputy Associate Counsel Charles Galbraith told USET members at their annual Impact meeting.  “This bill has 60 co-sponsors (in the Senate).  We only needed 60 votes to get this bill (VAWA) to pass.  That is thanks to the hard work by Tribal leaders in this room.  We’re going to be OK in the Senate.  This (passage of the bill) is going to take a lot of work on the House side.”

Painttown Rep. Terri Henry has been a long-time advocate for Native Women’s issues and reauthorization of VAWA.  She spoke to the USET Board of Directors during Impact week about continued support and efforts to have VAWA reauthorized.

“Without VAWA Reauthorization, the forward progress to address violence against Native Women is halted,” Rep. Henry stated.  “VAWA contains support for the development of program initiatives that will serve and protect various stakeholders, i.e., women with disabilities, teens, etc.; real time consequences for survivors and victims.”

According to Rep. Henry, the foundation of VAWA reauthorization to benefit Indian Country should be protection of Tribal Nation sovereignty and local solutions to local problems.  “Indian Tribes are the only governments in America without jurisdiction to protect women from domestic and sexual violence in their communities.  S.47, the bipartisan Senate versions of the VAWA, addresses this jurisdictional gap.  Tribes would be able to develop local solutions that will deliver long-overdue justice to Native women and safety to Tribal communities.”

USET President Brian Patterson is urging Tribal Nations and national leaders to support S.47 to reauthorize VAWA.  “I am heart sick that this legislation may lay idle while our Native Women may suffer the effects of not having this resource. The Cheyenne have a proverb: ‘A nation is not conquered until the hearts of its women are on the ground.’ I ask that you stand up for the rights of domestic violence victims in Indian Country defend Native Women and support VAWA reauthorization.”