Both were three-year starters on both the offensive and defensive lines and were part of the 2011 1AA state champion team and the 2012 1AA state runner-up team.  During their tenure as starters, the Maroon Devils went 37-7.

Panther signed to continue his football career at Mars Hill, and Wildcatt signed to play at Georgia Military College.

“I’ve been always looking forward to going to college,” said Panther.  “I just can’t wait to get there.  It’s always been a big dream to go play somewhere, to be able to play and show people what I can do.”

His mother, Gloria Panther, commented, “I love him and hope that he does good.  It was a surprise to me that he picked Mars Hill.  I’m just proud of him, and it will be closer to home.”

During his career, Panther earned All-WNC and All-Smoky Mountain Conference honors.  In 2012, he had 102 tackles and led the team with six sacks.

“It’s always been in the back of my mind, been thinking about it every day,” said Wildcatt.  “I’m just excited and can’t wait to see what it brings.” 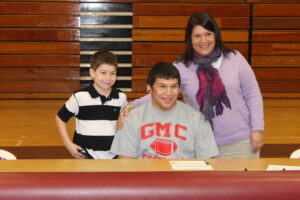 Jacob’s mother, Sheila Brown, said, “I just think it’s amazing. We worked really hard since the 7th grade to get him to this point.  His goal, since he was little, was to play football on Friday nights, Saturday and Sunday, and now we are on that second goal of playing on Saturdays so we’re very, very happy and proud of the choice that he has made.”

Wildcatt also earned All-WNC and All-Smoky Mountain Conference honors.  In 2012, he had 91 tackles, 4.5 sacks, and a team leading 24 tackles for loss.

Swain teammate Matthew Maennle was also a part of Wednesday’s event signing to join Panther at Mars Hill.  Maennle was the 2012 WNC Player of the Year and the 2012 Smoky Mountain Conference Back of the Year.  He also received All-State honors and graduates holding the record in every receiving category at Swain.