WASHINGTON – Fiscal issues and sequestration of federal expenditures are high on the priority list for many leaders and policy makers in Washington including the White House and visiting Tribal Nations this week.  White House Deputy Associate Counsel Charles Galbraith says addressing sequestration is a top priority for President Obama. 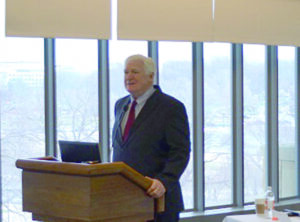 Congressman Jim Moran (D-VA) discusses the sequestration issue at a USET forum at the National Museum of the American Indian on Tuesday, Feb. 5. (USET photo)

Discussions about critical issues, including sequestration, were held on Tuesday, Feb. 5 at the National Museum of the American Indian (NMAI) in conjunction with the United South and Eastern Tribes, Incorporated (USET) Impact Week meeting.  The session, titled “A Look Ahead at the 113th Congress and Potential Impacts on Indian Country” was hosted by Drinker, Biddle, & Reath, LLP, with sponsorship by USET.

Sequestration will be very harmful for Indian Country according to Congressman Jim Moran (D-VA) who is the ranking member on the House Interior Appropriations Sub-Committee, which oversees budgeting for the Indian Health Service and the Bureau of Indian Affairs, among other programs and departments.  Rep. Moran thinks it is more likely that sequestration will take place than that Congress will pass a new budget law that would replace sequestration and provide for better targeted reductions as well as new sources of Federal revenue.

For example, he Moran told USET Tribal leaders on Tuesday that sequestration would mean an immediate cut of $200 Million in cuts to the Indian Health Service, crippling many of its already underfunded programs.

“There will be cuts to programs that are important to Indian Country,” Rep. Moran said.  “If sequestration happens it should be embarrassing for all members of Congress.  I don’t know that programs are totally going to escape the cuts.  I think we (Congress) should raise federal revenue so we can pay our own bills.”

Several USET Tribal Nations asked what is happening to protect the integrity of programs they depend for safety and welfare.

Sequestration appears likely to happen since the deadline is fast approaching on March 1.  On that date, the sequestration law takes effect unless Congress amends it.  Amending the law to prevent severe cuts to programs is requiring policy makers to make tough decisions.

USET president Brian Patterson noted, “The sequestration of federal funds, scheduled to take place, on March 1, will devastate federal Indian program funding.  The IHS alone, will lose $200 Million this year.  Sequestration is a blunt instrument for a Congress that cannot make the necessary decisions about how to govern our country.  Among those decisions is honoring the trust responsibility to Tribal Nations. In that regard, federal Indian program funding should not be considered discretionary and subject to cut, but rather mandatory and completely protected.”

Rep. Moran concluded by saying, “Some of these issues should have been decided or reauthorized more than two years ago.”