WASHINGTON – Seldom does someone get a front row seat to giant historical events that changed the lives of people around the world.  Celebrated and award winning Eastern Band of Cherokee Indian elder and World War II veteran Jeremiah “Jerry” Wolfe has been on the front row of three of these historic events.  During a reception at the United South and Eastern Tribes, Incorporated’s (USET) Impact Week in Washington, DC on Monday, Feb. 4, Wolfe was honored for his service as a World War II veteran, an award winning cultural preservationist, story teller, and Cherokee Elder. 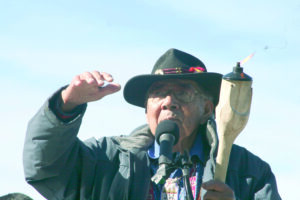 EBCI tribal elder Jerry Wolfe, shown in a 2009 photo, was honored by USET at a reception in Washington, DC on Monday, Feb. 4. Wolfe was unable to attend Monday’s event. (SCOTT MCKIE B.P./One Feather)

“There are so many war heroes and accomplished members of our USET Tribal Nations, we need to honor them so we will learn and live by the examples they set in their lives,” said USET president Brian Patterson.  “Jerry Wolfe is just one of many.  USET is proud to honor Mr. Wolfe and his Tribe the Eastern Band of Cherokee Indians.”

Wolfe enlisted in the Navy in July 1943, when he was a sophomore at the Cherokee Boarding School.  He traveled to Chicago to complete basic training before he was sent to southern England.

“We were sent to Chicago to train, then to Virginia, and on to England.  We didn’t know what we were doing in training.  Someone finally told us that we were training for the big invasion,” Wolfe said in a radio interview in 2003.  That invasion was the eventual June 6 D-Day Invasion of Omaha Beach, France in 1944.

Later, he would return home with rank as a 2nd Class Petty Officer/Communicator in charge of 13 enlisted white men.  He would take these men through New York City on Victory in Europe or V-E Day.  After more training and transfers, Wolfe was on a ship going to Iwo Jima or the Pacific.  President Truman dropped the bomb before Wolfe could make the final ordered destination and World War II ended.  He would travel on to Pearl Harbor where he says he got to witness the official declaration of peace signing on the Missouri by the Japanese.  That day was known to the world as Victory over Japan or V-J Day. 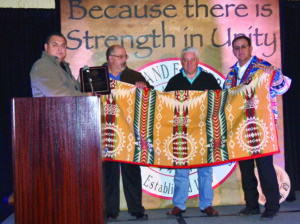 After returning home, Wolfe started a family in Cherokee that included three girls and five boys.  He would also become a mason and is one of the last Cherokee stonecutters.  Wolfe retired from the U.S. Department of Labor’s Job Corps in Cherokee in 1997 where he taught masonry. 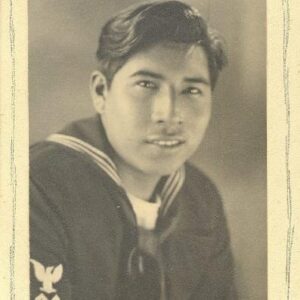 He also assisted with the Cherokee Exhibit at the National Museum of the American Indian.  Wolfe also works with the National Elders Council for American Indian/Alaska Native Employees Association for Natural Resource Conservation Service (NRCS), where he has provided cultural guidance and direction to over 250 employee association members and to NRCS nationwide.

“We are here to honor the bravery of Jerry Wolfe and his life work to preserve the culture, traditions, and language of the Eastern Band of Cherokee Indians,” President Patterson added.

Patterson Presented a plaque and Pendleton blanket honoring Jerry Wolfe to members of the Eastern Band of Cherokee Indian Tribal Council including Birdtown Rep. Gene “Tuney” Crowe, Big Cove Rep. Perry Shell, and Chairman Jim Owle of Birdtown who were on hand to accept the honor for Wolfe, who was unable to make the trip to Washington, DC.