WASHINGTON – The second term for President Barack Obama is underway and Tribal Nations will be involved with new initiatives according to White House Deputy Associate Counsel Charles Galbraith.  Galbraith says Tribal leaders have a lot of credibility with Congressional leaders. 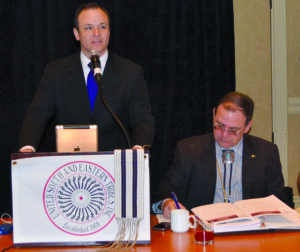 Speaking to the USET Board of Directors on Monday, Feb. 4, Galbraith told Tribal Leaders there is a need to work diligently on issues.  He illustrated by discussing the VAWA reauthorization, which is expected to have Congressional discussion this week.

“This bill has 60 co-sponsors (in the Senate).  We only needed 60 votes to get this bill (VAWA) to pass.  That is thanks to the hard work by Tribal leaders in this room.  We’re going to be OK in the Senate.  This (passage of the bill) is going to take a lot of work on the House side.  A lot of people care about what Tribal Leaders think about this issue and others.  You’re voice is going get this across the finish line,” Galbraith Stated.

The President’s domestic agenda include immigration, gun violence, fiscal situation, and climate change.  How do these issues make an impact or involve Tribal Nations?  Galbraith mentioned the White House has supported Indian Country issues like the Carcieri Fix, and continues to do so.  He says the President’s agenda includes tackling issues on immigration, gun violence, the nation’s fiscal situation, and climate change. 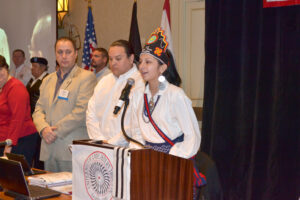 “These national priorities may seem far away, but they make an impact on Indian Country every day,” Galbraith told USET.  He mentioned that issues like gun violence may not happen as frequently or hit the headlines, but it makes an impact on Indian Country.  On issues like gun violence Galbraith says the President has rolled out a plan that is reasonable.  The plan works to close the background check loopholes, banning certain assault weapons and high capacity magazines, and increasing access to mental health services.

Galbraith says the White House is working to avoid fiscal situations that could be happens in the coming days?  According to published reports, “Sequestration is broad, automatic, across-the-board cuts to most categories of government spending. These are scheduled to take effect on March 1. Social Security, Medicaid, targeted anti-poverty programs, military pay, and the operational cost of ongoing wars are exempted. Benefits for Medicare patients won’t be touched, but payment rates to providers will.”

Galbraith said, “No one here needs to be told how important it is to avoid the sequester.  This would be something that would be devastating to programs that affect Indian Country.  The President has a concrete plan that will make adjustments to some programs like Medicare that will help future generations.  But, we need to do more so that we are not balancing the budget on the backs of programs that serve the needs of people, like education.”

Galbraith also mentioned that the country will hear a lot more information and action about immigration.  He says the President is calling for action on a policy that will build the framework that cracks down on undocumented works in America. Another issue is climate change.  Galbraith says all of Indian Country is feeling the impact of climate change.

Galbraith promised to Tribal leaders, “I am going to be in touch with many of you as we are working on this to make sure that Indian Country is at the table.  To make sure that the policies that we roll out have Tribal input.  This is a very complex set of issues and makes and impact on different part of the country in different ways.”

Galbraith finished by saying that USET Tribal Leaders and the White House need to do everything they can to work out these issues and more as there are opportunities to shape legislation that will make positive changes to Indian Country for the next decade.