The Cherokee Children’s Home was established in 1969 and has been the permanent or temporary home for over 1,700 Cherokee youth over the years.  A groundbreaking ceremony was held on Tuesday, Nov. 27 on a new $2.6 million facility.

The new home will be built on 28 acres located on Goose Creek Road in the Birdtown Community.  It will consist of two cottages each with nine beds and other amenities. 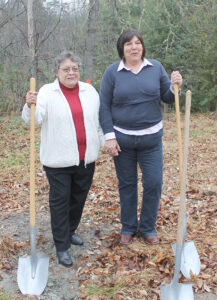 Gunnie Bradley and her niece Francine Watty were instrumental in the effort to construct the new Cherokee Children’s Home.

Two Cherokee ladies were at the forefront of the effort to have the new home built.  Francine Watty and her aunt, Gunnie Bradley, approached Tribal Council several years ago and asked that funds be found for a new facility.

“We never wanted to step on anybody’s toes,” Watty told the crowd at Tuesday’s event.  “We just saw a need for these children.  We thank you all for making that dream possible.”

“I think it’s wonderful and it’s sad too that we have to put our children in the Children’s Home, but that has to happen sometimes.”

Bradley added, “I just thank each and every one of you that’s helped us with this project along the way.  I just know that those children are so very important and one day they’re going to be our leaders.”

“Just having them in a safe, warm place is going to be good for them.”

Principal Chief Michell Hicks said, “Sometimes we all just need a little bit of motivation, and I’m just proud that the last two projects have been all about the children.”

“We have just had the opportunity to set a great stage for the future of our kids, and I think we’re definitely taking the right steps.”

Chief Hicks thanked Watty and Bradley for their vision as well as the efforts of the Cherokee Boys Club staff.  He also commented, “I want to thank the Tribal Council for looking ahead and taking care of the future generations of our people.  That’s what it’s all about.”

The Cherokee Boys Club will do the actual construction.

Tommy Lambert, Cherokee Boys Club general manger, related that the new home will be built with funds from the Eastern Band of Cherokee Indians, a grant from HUD, as well as monies from various fundraisers and contributors.

Lambert said the Boys Club acquired the site several years ago in anticipation of being able to use it for a project like the Children’s Home.

“We’re glad the project has come to pass and hopefully we’ll have a beautiful home here for the kids in need.”

Cris Weatherford, Cherokee Children’s Home director, commented, “I can’t explain what this is going to mean to me and what we do every day at the Children’s Home with taking care of these kids.”

He said it will mean the world for the kids to have an “up-to-date, safe, nice house” to live in.