The Bureau of Indian Affairs reported over the weekend a total of three separate fires on the Cherokee Indian Reservation.  Since Tuesday, Nov. 20, there have been fires at three different locations. 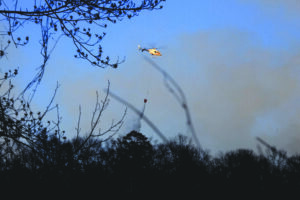 A helicopter drops water on a fire in the Big Cove Community on Friday, Nov. 23. It was one of three separate fires this past week on the reservation. (VITA NATIONS/One Feather contributor photos)

A fire on Lambert Branch burned an estimated six acres and was 100 percent contained as of Friday, Nov. 23 according to BIA Forestry Commander James Condon.

A fire in the Big Cove Community burned an estimated 25 acres and was 95 percent as of Friday.  The third fire burned around 50 acres and was 75 percent contained on Friday said Condon.

There have been no injuries and no damages to any structures, including any homes.

Condon said he has had 40 contract firefighters, 18 BIA firefighters, and a helicopter air support with five support personnel fighting these blazes. 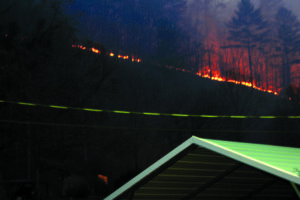 A fire burns in the Big Cove Community on Friday.

There is a suspicion that all of these fires were set intentionally; however, there are no suspects at this time.  The One Feather will report more on this as information becomes available.