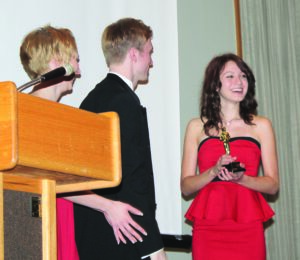 Neosha Pendergraft (right), an EBCI tribal member, receives one of two major theatrical awards presented recently at the Performing Arts Center in Tulsa, Okla.  She was recognized with the award “Best Leading Comedic Actress” for her role of Dorothy in the “Lost Pages of Oz and the Rise of the Winged Monkeys” (a retelling of the Wizard of Oz.) She was also chosen from all the actors with Encore! Theatre Arts and presented with the Directors’ Choice, a new award created this year by directors Josh and Mindy Barker. This award was for Pendergraft’s contributions to live theatre by doing whatever she could to assist the company, including twice stepping up and filling in for roles at the last minute.  She is a sophomore at Booker T. Washington in Tulsa and is the daughter of Shan Goshorn and Tom Pendergraft and the granddaughter of Edna Saunooke Goshorn of Whittier.