Miss Cherokee 2012 off to a busy start

Shi-yo! Ni-ga-da, On Sept. 29, I was crowned the 2012 Miss Cherokee. I then signed my contract with the royalty board the next day. On Oct. 1, I made my first appearance at the induction of the new board members for the Cherokee Boys Club. 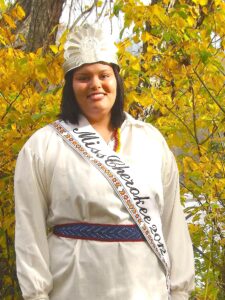 The very next day, the Tribe celebrated our 100th year for our Fall Festival.  We started off with the parade and during the opening I danced with the Anikituwah warriors. On Children’s day, we had a breakfast and prayer meeting with all three of the Cherokee tribes.  I also watched the Teen Miss Cherokee pageant that evening.

The next day, Elders day, I started off by introducing myself to the elders, and I also helped out on presenting the colors with the Steve Youngdeer American Legion Post 143 and sang the Star-Spangled Banner. Later on, I watched the Junior Miss Cherokee pageant, and then shortly after, I had a meet and greet with Sawyer Brown.

On the Fair’s Veteran’s day, I started off at the Expo center to present gifts to the veterans at the Vietnam Veterans Traveling Memorial Wall Ceremonies. That evening, we finished off the day with the Little Miss Cherokee pageant.

On the final day, Community day, I watched the last stickball game and later had another meet and greet with Lonestar and watched the concert.

On October 25, I went to the Chief Joyce Dugan Cultural Arts Center to listen to Chaske Spencer speak about his life and how he had grown up dealing with drugs and alcohol after which we had the privilege to have dinner with him at Brio Tuscan restaurant at Harrah’s Cherokee Casino Resort.

I would like to thank the judges during the pageant that have believed in me to be the representative of our Tribe. Also, I would like to thank Kelly Driver for making this year’s pageant a wonderful experience for the both of us. I’d like to thank Jonnie and Nancy for making my traditional attire for the pageant and working with me for the rest of the year. A special thank you to my family for believing in me for another time during the pageant. To Deb West and Lula Jackson on preparing both Kelly and me for the pageant. For the royalty board, for all you have done so far, as I carry my title, for this is only the beginning. For the parade: thanks to my walkers Raven Frankiewicz, Redbird Sequoyah, Kenzie Garcia, Micala, Elijah, and Cain Arch. Terry Bradley for driving the car and for more parades to come. Thank you Tommy Lambert for letting me participate in the induction of the New Board members for the Boys Club. Thank you Steve Youngdeer Post 143 for letting me sing during the presenting of the colors. Also, Warren Dupree for inviting me to participate in the ceremonies and present the gifts to very special people that have fought for our country at the Memorial Wall. I’d also like to make a special recognition to miss Bradley Welch, miss Aliyah Bigmeat, and miss Marcela Garcia. I’m looking forward to working with you young ladies for the rest of the year. If there is anyone that I have forgotten I apologize. It is a great honor to receive this title; I will work to the best of my abilities to represent this tribe well.